Diseased tree lifted over homes by crane to be recycled 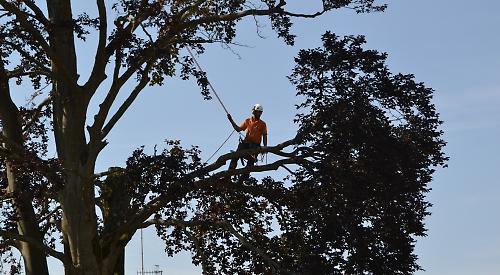 The copper beech tree, which had been in Pearce’s Orchard for 170 years, was felled by Heritage Tree Services on Thursday last week.

It had contracted a disease called Kretzschmaria deusta, which ate away at the cellulose, a fibre within the tree, leaving it weak and at risk of falling over.

The road was cordoned off for the day as surgeons climbed the tree to secure sections of the tree to the crane, which were then sawed loose. The branches were then lifted over the nearby homes by the crane and lowered to the ground, where they were fed in to a 250 horsepower chipping machine.

It took about seven hours for the team to fell the entire tree and the chippings will be used for renewable energy.

An English oak tree will be planted in place of the old tree in September.

Hugo Loudon, who runs Heritage Tree Services, said: “This tree has sustained a pathogen which renders it relatively brittle and effectively rotten, so it could snap or fall over. This tree is a hazard so we need to remove it and start all over again. It’s a sad day to say farewell to this tree, it’s a tough life being surrounded by tarmac, garages and buildings rather than a nice forest floor.

“It’s living in a sea of concrete so it’s not surprising that it’s become weak. By this time next year we will have three new trees in.”

The company has replaced dozens of trees in the town and Mr Loudon says they are an important part of the infrastructure.

Mr Loudon said: “Our objective is to get new trees in, preferably big trees that will contribute to the community landscape and the neighbourhood in terms of absorbing heat and retaining rainwater. Trees calm people and towns are absorbing more heat now that they are becoming more and more important.”

He added: “Wherever we work in Henley we are trying to put as many new trees in as possible so there is something for this town that is worthwhile and contributes to the community.”