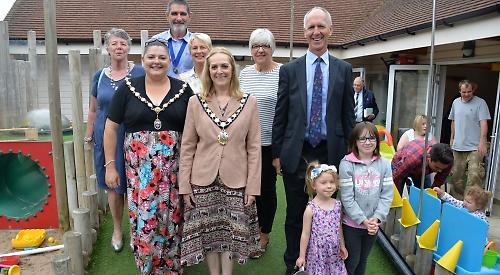 A NEW-LOOK children’s centre for youngsters in Henley has been officially opened.

Dozens of guests attended the opening of the “healthy living facility” at the d:two centre in Upper Market Place on Saturday, where the ribbon was cut by Henley Mayor Kellie Hinton with Councillor Zoe Patrick, chairwoman of Oxfordshire County Council.

They gathered inside the main hall for speeches before the doors were opened to the new centre. Youngsters then had an opportunity to sample the activities on offer, including inside and outside play areas, activities and toys.

The centre, which has been open to parents and children since April, is run by Henley Baptist Church alongside youth and community group Nomad.

It offers soft play and keep-fit sessions and group meetings on healthy living, food and nutrition and tackling negative eating habits and other addictions.

The baptist church and Nomad had previously run the former Rainbow Children’s Centre but in 2013 it lost out to the Action for Children charity when the county council put the contract out to tender and withdrew its funding.

But at the start of the year the town council chose them to manage the facility, rather than an alternative plan drawn up by parents, as it offered the premises, governance and the necessary expertise.

In February, they were awarded £21,000 in start-up funding from a £1 million transition fund set up by the county council following budget cuts. Henley Town Council also budgeted £10,000 to help support the revamped facility. The church has said the set-up and running costs for the first year will be £36,000.

The council had planned to close all 44 of its children’s centres and replace them with eight new facilities in order to save £8 million. Now 34 centres across the county will remain open after communities came forward to run them.

At the opening, pastor Roger Cole said: “Back in the days when the centre first opened we had a bigger budget to run it. Since then, children’s centres have been through a number of changes and here we are today.

“The baptist church is not a business, it is a family and we want that family feel to be right at the front of what we do here.

“Thanks to Oxfordshire County Council and Henley Town Council for the grants which enable us to get going and run this centre. Also thanks to everyone who has already volunteered and sought to be helpful.

“This place couldn’t be run without volunteers and very often they don’t get thanked. Thanks to all those who have put their blood, sweat and tears in to this family centre.”

Mr Cole added that the centre was hoping to add a special Saturday service specifically aimed at fathers.

Centre manager Karen Ashton said: “The ages of nought to five are a crucial time for the development of children, that’s why this centre first opened and why it was such a tragedy that it closed down. I was really taken aback by the love people have for this centre. It’s the hub of Henley and brings families together.

“I’ve met many parents who have moved to Henley and have nowhere to socialise. This gives them a place to bring their children and form everlasting friendships.”

Councillor Hinton attended with her daughter Hallie, seven, and other town councillors.

“I can remember the first few meetings when we discussed the closure of the centre and how emotional it made some of us because we know how much it means to the town. Everything that’s done here is so valuable and I’m so proud to have it here.”

Cllr Patrick added: “It’s delightful to see communities like this come together to help preserve what is really valuable. I’d like to thank all the volunteers because these services can’t continue without you.”

Parent Paula Harding said the centre is important for the town.

She said: “I go every week and have been since my daughter was little. It’s always been here and all the kids love it, it’s really good. The staff are great and supportive, we couldn’t ask for anything better.”

Fellow parent Emma Taylor, who lives in Western Avenue with her husband Andy, daughter Lilia, seven, and two-year-old son Gabriel, founded the Save Oxfordshire’s Children’s Centres campaign in 2013 after a previous threat of closure.

She said: “It’s absolutely brilliant that we now have a family centre up and running. I’ve taken Gabriel there a few times and loved the range of activities there on offer.

“It is vital because it brings people together in a completely different way to other groups. People can drop in and Karen is so friendly and gets to know people. It’s fantastic to have that knowledge and skill base. If it was taken over and volunteers you wouldn’t have that.”

“The centre was so well used and so important that it didn’t surprise me that people were up in arms and passionate about it.”

She added: “It was great that there was more than one option of what to do. Lots of people were suggesting ways to keep it open and that shows just how loved it is.”