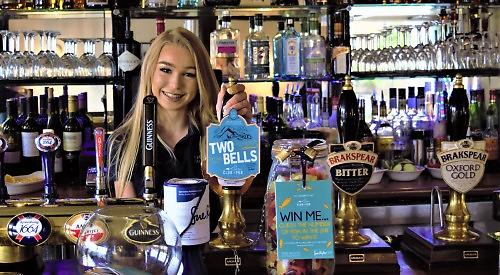 A HENLEY pub is raising money for the Sue Ryder Nettlebed hospice by challenging customers to guess the number of sweets in a jar.

The Angel on the Bridge, which is run by Brakspear, is encouraging customers to estimate the number, at £1 per guess.

Proceeds from the competition go to the charity with the winner, who will take home the jar of sweets, announced tomorrow (Saturday) after the Henley Club to Pub Swim.

The Angel on the Bridge is the end point of the challenge, and will be hosting a post-swim party and barbecue for competitors and spectators.

It will also be serving Two Bells, the beer specially brewed at the Bell Street brewery to mark the swim, and the company is donating 10p for every pint sold to Sue Ryder.

The Club to Pub Swim is in its fourth year and has grown in popularity, with an expected field of close to 700 swimmers this year.

All swimmers who finish the course will be greeted with a bottle of Two Bells, as well as a commemorative medal which doubles as a bottle opener.