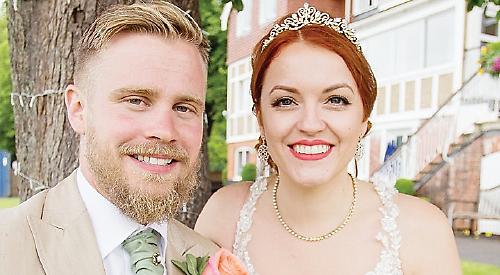 MEMBERS of the Henley Synchronised Swimming Club performed a special routine in the River Thames at the wedding of one of its coaches.

The 11 girls and one boy put on the short show in the water outside Leander Club for under-12s coach Mikki Bennett, who married Jaime Carter, a former Great Britain gymnast, on Saturday.

The youngsters, aged 10 to 17, performed the routine to Jessie J’s Flashlight in front of wedding guests. Miss Bennett’s mother, Karen, the club’s head coach, said: “Mikki and the guys just loved the idea of doing a short routine for the wedding.

“I thought the youngsters did well. They were excited because it was something different. Mikki absolutely loved it.

Ms Bennett, 27, lives in Sonning Common and makes synchronised swimming costumes, providing the ones for the GB duo Olivia Federici and Katie Clark at the Rio Olympics. She also works as a colour and style consultant.

Mr Carter, 26, is a landscape gardener and also coaches at the club, helping members with stretching on land.

The couple met online more than two years ago. They appeared on the TV programme Say Yes to the Dress where a team of specialists guide brides through the process of selecting, altering and delivering each dress in time for their perfect day.

The couple currently in Valencia and will take a honeymoon in Mexico in September.