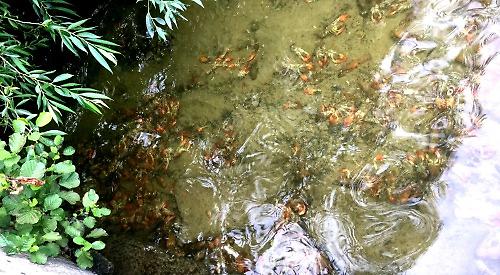 ANOTHER large pile of dead crayfish has been spotted in the River Thames.

Hundreds of the creatures were seen in the water near the riverbank at the end of Ferry Lane in Medmenham.

Residents Leonard and Suzanne Phillips noticed them on the same day that a large number were found dead near the jetty off Ferry Lane in Aston, about one-and-a-half miles upstream.

The couple were concerned and reported the incident to the Environment Agency but thought little more about it until they read about the find at Aston in last week’s Henley Standard.

Mr Phillips said: “There were absolutely hundreds of them in one pile, with many more scattered over a wider area.

“At first I thought somebody had dumped them but if it’s happening in other places then it’s quite alarming. I hope it isn’t some kind of pollution or poisoning.

“I’ve lived in the village for 45 years and I’ve never seen anything quite so strange.

“They were all in this big heap, though they’ve gradually drifted away since then. It was a real shock when we saw it had happened in Aston as well.” Mrs Phillips said: “I hear the Environment Agency has suggested that they were dumped by a caterer after Henley Royal Regatta or the Henley Festival but that doesn’t make sense to me.

“A few days before I found some dead crayfish in the Thames while walking near Chimney Meadows [between Abingdon and Witney].

“Not only do crayfish have value as food but you surely wouldn’t scatter them over such a wide area.”

In both cases the crustaceans were red signal crayfish, an invasive American species introduced to Britain in the Sixties.

They can sometimes carry a fungal disease called crayfish plague, which kills native white-clawed crayfish but are not themselves susceptible to it.

The Environment Agency said there was no evidence that either incident had been caused by disease or pollution as no dead specimens of any other species had been found.

He said it was possible they had been dumped by a fisherman or caterer but there was no evidence for this either so the agency would not be investigating any further.

In some instances, a heatwave like the one which swept the country at the start of the month can cause mass suffocations because it reduces oxygen levels in the water.