Swimmer's in hurry to reach pub 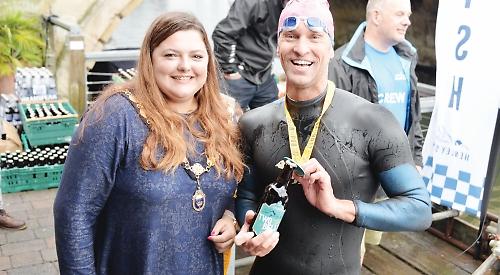 THE winner of this year’s Henley Club to Pub swim smashed the course record by almost a minute-and-a-half, saying he wanted to get to the bar first.

Richard Stannard, 43, swam from Henley Rowing Club to the Angel on the Bridge in 17 minutes and 12 seconds to claim victory in the fourth annual event.

He was one of more than 500 swimmers who took part in the 1.5km race on Saturday evening.

The event featured open men’s and women’s classes, traditional, masters (either aged 45 to 55 or 55 and over) and a sporting category where friends could swim together.

Most of the swimmers wore wetsuits but several hardy souls wore only swimsuits.

They had to swim 400m from the club upstream towards Marsh lock before turning at two large marker buoys and then come back downstream, hugging the bank next to Mill Meadows.

Mr Stannard, a former professional and GB triathlete from Maidenhead, climbed out of the water first and joked: “I wanted to avoid the rush at the bar.”

As the swimmers emerged, they were presented with medals by Mayor Kellie Hinton and her escort Councillor David Eggleton on the deck of the Brakspear pub.

They were also presented with a bottle of Two Bells beer, which they could open with the medal as it doubled as a bottle opener, by Brakspear’s marketing manager Emma Sweet. The beer is brewed specially at Brakspear’s Bell Street brewery and so named because the swimmers have to complete the course between the 7pm and 8pm chimes of St Mary’s Church.

Mr Stannard, who had not taken part before, said: “It was brilliant fun. I’ve managed to win the Henley Classic a couple of times so I was pleased to add this to the races I’ve done on this stretch of the Thames. If you have got a bit of flow on the river and you know what you’re doing, it can help you swim much, much faster.

“It’s definitely lots of fun and the fact the medal is a bottle opener and you win a bottle of beer is awesome.”

He praised the organisers Henley Swim, saying: “They’ve done a really good job to create some iconic events on this part of the river.

She said: “I’m very pleased as I wasn’t quite sure how it was going to go. It was my first river swim and it’s very different from swimming in a pool.

“It wasn’t too bad, a little bit tough going upstream, but I tried to keep to the bank.” Rowan Fuller, of Walton Avenue, Henley, took part with friends Oliver Collin, of Norman Avenue, and Tristan Stubbs, of Damer Gardens.

He said: “We do it as a challenge and we don’t practise. It was terrible — it was hard work and the current’s way too strong.”

Mr Collin added: “I’m not a swimmer but it’s a great event and it’s great for Henley.”

Swimmer Lynne Lambourne, from Peppard, said: “I’ve never been in the river before but I’m up for a challenge.”

Town councillor Will Hamilton, who has taken part in all four Club to Pub Swims, said: “It’s a great community event and it’s a shame more people from Henley don’t do it. It is hard work but you don’t have to be an Olympic swimmer to do it.”

Councillor Hinton said: “It’s a very well-run event and I felt quite privileged to be there. It is one of those feelgood events that you love to be at.”

Henley Swim founder Jeremy Laming said: “I think it was actually the best we have had. Everything went really slickly and the feedback we have had has been really top notch with people saying it’s their favourite event.

“My passion is open water swimming and I want as many people as possible to experience and enjoy it.”

Henley Swim’s final event of the year will be the Thames Marathon on Sunday, August 6.

l The previous record was 18 minutes and 40 seconds, which was set by Antonio Almaraz Serrano in 2015.