Our mission to help Syrian refugees 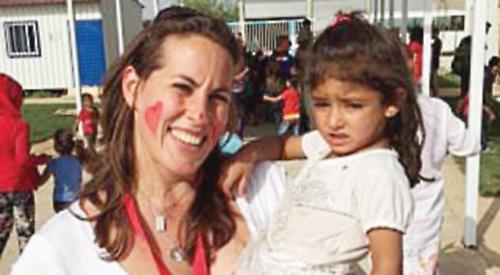 A COUPLE who travelled to Lebanon to help refugees say the experience has made them want to do more.

Vaughan and Victoria Wickins took part in a 63km “ultra-walk” in the country to raise money for the thousands of people who lost their homes in the Syrian refugee crisis and met some of those affected.

The couple, who live in Scarletts Lane, near Wargrave, with their three children, volunteered after Mr Wickins took part in a marathon in Jordan last year in aid of Open Doors, a Christian charity which helps persecuted people around the world.

Mr Wickins, 41, who works in mining finance, said he became involved with the 4th Musketeer, which encourages men “to lead lives of adventure with a commitment to focusing on injustice”.

Mr Wickins said: “Men have made most of the mess in the world and need to fix it.”

He flew to Egypt and travelled through Israel and Jordan before running the marathon in 40C heat.

Mr Wickins said: “It was three countries, four border crossings, a bomb scare. It was eye-opening but it’s what the refugees go through and that’s remarkable.

“The Middle East is such a confusing region and notoriously badly portrayed as to what’s going on. The only way to understand is to go there.”

After returning to Britain, he persuaded his wife to go with him on his next visit.

Mrs Wickins, 38, said: “I got drafted in because we went to a celebration of the Jordan visit and the guy leading the talk said he had asked them all to bring someone to sign up. Vaughan had brought me!

“I wanted to join because Vaughan had become very passionate about the crisis and I didn’t feel quite as in touch with it.”

They decided to take on an ultra-walk of 63km and spent seven months in training.

Mrs Wickins said: “I’m a mum of three kids so we decided to do an ultra-walk as I couldn’t do more. The training time was crazy — I was out for six hours one day! However, I don’t think I had prepared myself for what I was going to experience emotionally.”

The couple flew to Lebanon in May and then travelled to Zahle in the Beqaa Valley, where they visited the True Vine Church, which helps care for refugees and their families.

The church provides classrooms to teach children and also offers lessons in vocational skills such as sewing and computer repair.

Mrs Wickins said: “It’s mind-blowing. They started with several people praying and built it into a church which serves thousands of people.

“The church serves on three sites: the church itself and two community centres in the refugee camps. The top floor is a changeable space. When we were there they had a team of Brazilian dentists — teeth and hygiene are a real issue there.

“Education is key as there will be a long-term impact of four million children being out of education. The church is very focused on that and is a beacon of hope. Your spirit lifts when you see a little church like that do all that work.” Mr and Mrs Wickins also visited the refugee camps and met some of the families who had fled Syria.

Mrs Wickins said: “The children are wonderful but their eyes tell a thousand stories of things no person should have seen.

“I was on face-painting duty when I noticed some girls would wash their faces and then come back to get it done again. They just wanted the touch and care.

“In our lovely lives we can’t visualise that there are people who have had everything ripped away.”

The couple heard many tragic stories. Mr Wickins said: “Families were waking in the middle of the night to flee their homes with their small families and walking overnight with whatever they could carry.

“With a lot of these refugees they are just eking out an existence but is there any hope of a future for them? They might be safe but their lives are no less tragic. They can’t go home as it isn’t there, so they are stuck in limbo.

The couple completed the ultra-walk towards the end of their week-long trip, setting off at 11pm to miss the heat of the day and finishing just over 15 hours later.

Mrs Wickins said: “You have all this emotional stuff first and that’s a big motivator. All the things we had seen and heard pushed us onwards and 63km is not far when a family has walked twice that to get to safety.

“We were spoiled as every 5km there was water and bananas — it wasn’t like that for the people fleeing war.”

The couple, who attend the parish church of Waltham St Lawrence, plan to return next year.

Mrs Wickins said: “We are very passionate about what’s going on and what we can do to continue helping, even in the tiniest way.”

To make a donation, visit www.justgiving.com/fundraising/VaughanVictoria