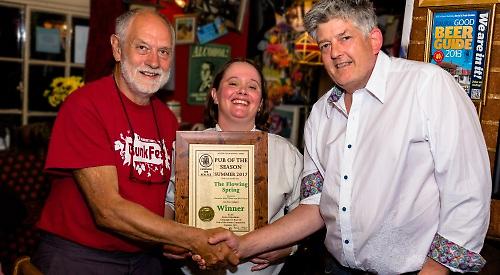 A PUB has scooped its first award as a free house.

The Flowing Spring at Playhatch was named the summer pub of the season by the South Oxfordshire branch of the Campaign for Real Ale.

It comes less than two months after landlords Nick Willson and his wife Hazel Lucas bought the freehold of the pub from Fuller’s after six years as tenants.

The award was presented to the couple by South Oxfordshire CAMRA chairman David Cooper.

It recognises their success in buying the freehold, their commitment to keeping it a traditional country pub and for the extended range of real ales they now offer.

Mr Willson said: “We’re so proud to have received this award. Having traded here for more six years, we were determined to purchase the pub from Fuller’s.

“It is our livelihood and we love the pub, the customers and what we have achieved.

“Other prospective buyers who had viewed the pub clearly had no intention of keeping it as one, looking at it as a piece of land to develop — even though it’s on a flood plain. We couldn’t let that happen.”