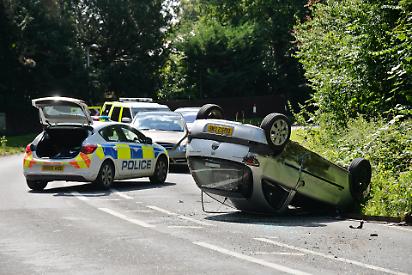 A WOMAN escaped with minor injuries when her car flipped on its roof following a crash in Shiplake.

The silver Vauxhall Corsa, which was heading south along the A4155 towards Reading, was struck by a red Toyota RAV4 that was pulling out of Station Road at about 1pm today. (Tuesday)

A passer-by pulled the woman from the vehicle and waited with her until police and ambulance crews arrived. She had a bruised and sore ankle but was otherwise unhurt.

The road was shut and police directed traffic around the village war memorial with help from Henley town councillor David Eggleton, who happened to be near the scene.

Officers interviewed the drivers of both vehicles then began sweeping glass from the carriageway. The road will reopen as soon as the vehicles can be towed away.

For more on this story, see Friday's Henley Standard.