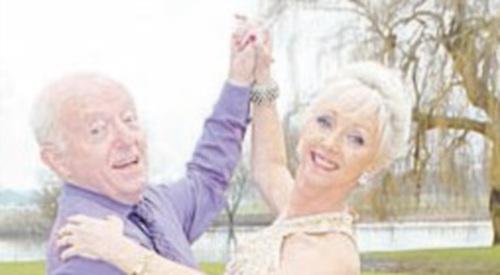 The radio presenter, who lives in Wargrave, was unveiled this week as the 13th contestant to take part in this year’s series of Strictly Come Dancing, following in the footsteps of her late husband Paul Daniels.

The magician, who died in March last year, appeared on the eighth series of the show in 2010 and was eliminated in the second week.

Meanwhile, 58-year-old McGee is competing in the latest series of the BBC’s Celebrity MasterChef.

She featured in heat two of the third episode of the series, shown on Wednesday evening, and made it safely through to the next round. McGee will join celebrities including singers Aston Merrygold and Mollie King, Paralympian Jonnie Peacock and TV presenter Ruth Langsford on the 15th series of Strictly, starting on September 9.

She said: “There are no words to describe how I feel about performing on Strictly Come Dancing. The excitement is overwhelming. I can’t stop smiling.

“I’ve always loved the programme and wanted to do it and when Paul got it I was really jealous. I loved it when he did it so when they rang and asked it was a yes 100 per cent.

“Keeping it a secret has been a torture. I’m very good at keeping secrets but Strictly was a different thing because I knew my mum and other people would be excited.

“I wasn’t allowed to reply to anyone and confirm it. I’ve been really busy recently so that was quite easy, up until last week when we started filming bits and you really want to tell everyone.”

McGee achieved fame through her appearances with Daniels, including The Paul Daniels Magic Show, which ran on BBC 1 from 1979 to 1994. She is also a trained ballet dancer and ran a dance company.

Now she hosts her own Sunday morning show on BBC Radio Berkshire.

McGee said she had already started rehearsals for the show.

“It’s totally exciting,” she said. “It was nerve-racking but we’ve all had a ball already and everybody is getting on. Nobody can get us to shut up — they had to a whistle to shut us up and start dancing.

“I’ve learnt part of the launch group dance and a few steps and I got to do a waltz with Jonnie Peacock. Every day is quite different but there are lots of rehearsals.

“I love music and I love dancing but I’ve never done this kind of dancing. I haven’t danced for 35 years. I trained at the Royal Ballet School but that’s very different.

“Strictly is like going back to my old days when it all started. I had the experience when Paul did it and the team are so friendly.

“I’m always just myself and I will give it what I’ve got. I’ve had such fun and I hope that’s what it will be for my journey.

“I’m not worn out, I feel quite revitalised, but I did get out of breath. I know I’ll pick up the steps.”

The launch episode of the show will feature a tribute to former host Sir Bruce Forsyth, who died on Friday, aged 89.

“As soon as he walked into that studio it lit up, he just filled it. Whenever Paul was interviewed he said his inspiration was Bruce.”

In the first round of MasterChef, she cooked poached pear in cinnamon red wine sauce with cream, which was praised by judges Gregg Wallace and John Torode, although they said they wanted to see “more skill”.

In the second round she worked at the Margot Italian restaurant in London under head chef Maurizio Morelli. She prepared grilled octopus, with lentils and quinelled Italian sausage.

In the final round McGee made salmon with pesto, spinach and pine nuts, served with roasted tomatoes and green beans. She also made a whipped ricotta, with cherries and almond flakes.

Judges praised the flavour of her dishes but Wallace said he was disappointed that she didn’t put in more effort.