London to Paris on child's bicycle 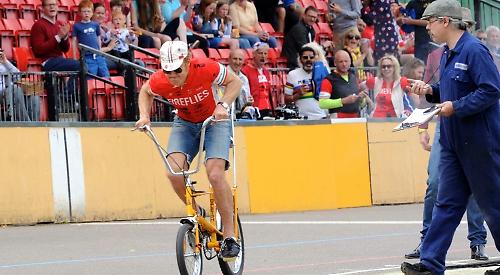 A MAN from Henley is to attempt to ride from London to Paris on a children’s bicycle from the Seventies.

Matt Richardson will be one of 200 cyclists taking part in the 310-mile ride over four days, beginning on September 14.

He will be on a 1972 Raleigh Chopper, which is known for its distinctive backrest and smaller front wheel, and raising money for the blood cancer charity Bloodwise.

Richardson, 51, of Deanfield Avenue, has previously cycled up Mount Ventoux in France and the Stelvio Pass in Italy on the bike.

He also set a world record for the longest distance covered in one hour on a Chopper when he completed 69 laps of the velodrome in Palmer Park, Reading, in 2015.

Richardson, a solicitor, raised more than £10,000 with these challenges.

He said: “None of those took longer than three hours, so I’m looking forward to the London to Paris ride as 500km in four days presents an entirely different kind of challenge.

“The long distances and consecutive days in a not particularly comfortable saddle will require a different kind of determination but it’ll give me plenty of time to think about why we should be supporting Bloodwise and the difference it makes to the lives of those diagnosed with cancer. I lost my father to cancer in 1999 and this gave me huge motivation to ride hard and raise money even harder.

“After becoming a father myself, my time was limited so I sought alternative ways to raise awareness. The Raleigh Chopper is a fondly remembered, iconic bicycle and provides the perfect vehicle for fund-raising.”

Richardson, who helped found the G.S. Henley cycling club, has already raised more than £1,200 ahead of the challenge, which will start at Eltham Palace in Greenwich.

Matt Lawley, head of sports at Bloodwise, says: “We are so grateful to Matt for his latest efforts.

“While we have made great strides in finding better treatments for blood cancer, sadly the disease is still the third biggest cancer killer and the fifth most common cancer.”

To make a donation, visit www.justgiving.com/raleigh-chopper-london-to-paris