Comedian marries in front of celebrities 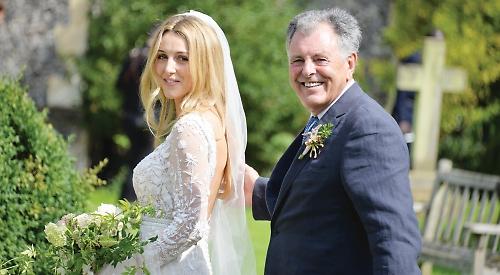 STARS from the worlds of entertainment and sport attended the wedding of comedian Russell Brand and his partner Laura Gallacher at Remenham church.

The couple, who live near Henley, were married in a traditional ceremony at St Nicholas’ Church on Saturday, where the chief guest was their baby daughter Mabel.

After the service, the newlyweds and about 150 guests boarded The New Orleans to take them to the reception.

Brand, 42, who wore a dark blue suit, open-neck white shirt and black cravat, arrived in a silver people carrier with nine-month-old Mabel. He greeted his guests and introduced his daughter to them before entering the church.

The bride, 30, travelled to the church in a white Rolls-Royce accompanied by her father, who captained Europe to victory in the Ryder Cup in 1995. She wore a white lace dress with a slit to just above the knee and a veil and carried a bouquet containing pink roses, honeysuckle and astrantia.

Guests arrived at the Grade II listed church in a fleet of taxis and 4x4s and were greeted by security men.

The service, which began at 2pm, was led by the Rev Canon Martyn Griffiths, rector of Henley with Remenham, and lasted for about 45 minutes. A loud cheer could be heard from inside the church as the couple left the sacristy to walk down the aisle after signing the registers. They then emerged to music being performed by the Brass Funkeys, an eight-piece London brass band.

The newlyweds were showered in confetti by their guests before leading everyone on foot the short distance to the riverside, where they boarded Hobbs of Henley’s mock paddle steamer, which the comedian had reportedly spent £2,300 on hiring.

Once all the guests were on board, the vessel made the short trip via Hambleden lock to the couple’s home nearby for the reception which reportedly had an Indian theme.

“It was a lovely day,” said Rev Griffiths. “It was a very traditional wedding. They had two very traditional hymns, Guide Me, O Thou Great Redeemer and Jerusalem, and two readings, one of which was from the Bible, Romans chapter 12, and the other was a rather good secular reading as most couples have these days.”

He said he had met the couple “a couple of times” and they had attended marriage preparation classes along with about 20 other couples in March.

Rev Griffiths, who is due to retire in January, said: “One of the advantages of not recognising celebrities is you don’t care who you’re talking to! I’m the sort of priest who treats everyone exactly the same. Most of the famous faces I’ve married have been rowers — that goes with the job.”

Dick and Judith Fletcher, who are neighbours of the couple, attended the reception, which ended at about midnight. Mr Fletcher said: “It was a lovely family occasion and it was very well organised.

“The New Orleans was a big success coming down the river. We were happy to greet him along with a whole load of other people. Lots of people and neighbours were there and it was a really nice community of people. I’m pleased to say we weren’t the only unknown people there!”

Brand was previously married to singer Katy Perry but the couple split in December 2011 after 14 months.

He and Miss Gallacher moved to this area in November 2015 and he is a regular visitor to Henley.

He performed at the Kenton Theatre in March last year and gave a secret reading to children at this year’s Henley May fayre.

Brand is due to appear at the Christ Church Centre on October 26 to discuss his new book, Fix: Freedom From Your Addictions, as part of the Henley Literary Festival.