I was fined £100 for parking legally at PM's supermarket 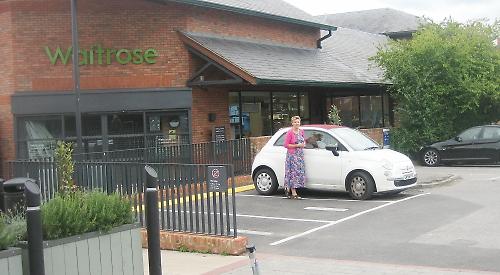 A WOMAN has spoken of her anger after being given a £100 parking fine unfairly while visiting a supermarket.

Helen Johnstone’s car was filmed by cameras overlooking the private car park of the offices next door to the store and then sent a penalty notice in the post.

But she only actually parked in the car park of the Waitrose store in Twyford, where Prime Minister Theresa May is a regular customer.

Mrs Johnstone, of Dark Lane, Wargrave, has complained to both Waitrose and Britannia Parking, which enforces parking at Twyford House next to the store, but says both companies have failed to admit there is a problem despite the fine being rescinded.

The incident happened on July 18 when she spent a few minutes shopping in the supermarket.

Mrs Johnstone, a freelance journalist and PR, parked in one of three new spaces outside the store entrance which were created following its recent refurbishment.

She believes that the cameras at Twyford House, which use automatic recognition to track vehicles coming in and out of the site, filmed her Fiat 500 as she was reversing into at Waitrose because the manoeuvre required her to momentarily use the entrance of the private car park. When she left after doing her shopping, her car was facing forwards, so didn’t go close enough to Twyford House for the cameras to pick her up.

When she returned to Waitrose the next day she was again filmed by the Twyford House cameras, leading the system to believe she had spent the previous 24 hours in the private car park.

Mrs Johnstone did not discover the parking notice until she had returned home from a holiday in Scotland.

“It ruined my holiday,” she said. “It was clear from the digital images I was manoeuvring the car to reverse into a Waitrose bay behind me. My car was clearly in transit with the run lights on.

“Since Waitrose was refurbished there has been additional parking with metal barriers to reserve them. When the barriers are down the public can use them.

“I used to go first thing in the morning when the store opened and get a few things and I would park in the new spaces near the entrance. You have to nose into the private car park so you can reverse into the bays. I’ve done that on many occasions.” Mrs Johnstone wrote to Britannia, which also enforces parking at the supermarket, to explain what had happened.

The company agreed to cancel the fine but warned her to “park correctly” in future.

“But Britannia couldn’t produce any photographs of my car parked in the Twyford House car park, as it never was,” said Mrs Johnstone.

She also complained to the store but the deputy manager told her it was not Waitrose’s responsibility.

She said: “I was more angry at the attitude of Waitrose than the parking company. I got a nonchalant reply saying it was nothing to do with them.

“I was surprised that Waitrose was happy for a customer to have this happen to them when parked in a Waitrose bay. They have left the door open for other customers to be unfairly fined.

“When I flagged it up I expected them to at least investigate and take whatever action was necessary to ensure it didn’t happen again to me or any other customer.

“The problem is all the worse because it is regular Waitrose shoppers who are most at risk of being fined. also enforces parking in the Waitrose car park and I would have thought they could get together and sort out the problem before more drivers are unfairly hit with a £100 fine.I was very disappointed and surprised Waitrose would be prepared to be associated with this type of tactic, never mind condone it. Perhaps the Prime Minister is the only customer Waitrose value?”

Mrs Johnstone added: “I have been back to the store but I no longer park in those .”

Wokingham borough councillor Lindsay Ferris is to take up the issue.

He said: “There have been ongoing problems with people getting parking tickets in the private car park for years. It used to be a man in a white van going around clamping vehicles and when that changed we thought the problem had been resolved.

“Waitrose has a responsibility as well. If one of their customers has been treated that way it could be affecting a lot more.”

A Waitrose spokeswoman said: “While we are sorry to learn of Mrs Johnstone’s experience, the Twyford House car park is not a Waitrose car park and is operated and managed entirely by a separate parking management company so I’m afraid this is something she would need to raise with them.”

Britannia Parking said it had approved Mrs Johnstone’s appeal after considering her case and would “continue to monitor the situation in Twyford going forward”.