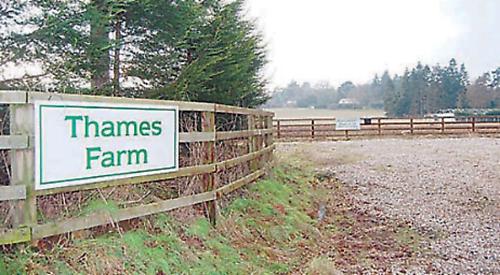 South Oxfordshire District Council is to challenge the decision to approve 95 homes at Thames Farm, near Shiplake, we can exclusively reveal.

The Henley Standard understands that the council will announce its intention to appeal early next week, when the papers will be served.

It has been under pressure to seek a judicial review since planning inspector John Braithwaite’s decison last month to overturn the council's decision to refuse to grant landowner Claire Engbers planning permission.

The Henley Standard understands that the council will claim Mr Braithwaite made "legal errors" in his decision to allow the development on the 14-acre site off Reading Road to go ahead.

He stated the new houses were urgently needed to counteract a shortage across Oxfordshire and that objectors’ concerns about road safety could be overcome.

The decision was strongly criticised by councillors of all parties and levels of local government, who have opposed any homes at Thames Farm from the outset.

They say it undermines the joint Henley and Harpsden neighbourhood plan, which passed a referendum last year and did not earmark the land for development.

There were also calls for the district council to challenge Mr Braithwaite’s decision from civic groups and Shiplake residents.

The Henley Society said the decision could lead to housing being permitted on other sites not earmarked for development on the neighbourhood plan, while villager Richard Verrall launched a petition calling for the council to mount a legal challenge.

Last month, the Henley Standard revealed that the decision on whether to seek a judicial review would be taken by the council’s cabinet rather than the whole council, meaning that its Henley members, Stefan Gawrysiak, Lorraine Hillier and Joan Bland, would not have a say.

But the council has now decided to go ahead with the appeal and has begun proceedings.

Mrs Engbers first sought outline consent for 110 homes in June 2013 but the district council refused that amid opposition from Harpsden and Shiplake parish councils.

At about the same time, she submitted Thames Farm for inclusion in the neighbourhood plan but was unsuccessful. The site went out to public consultation with 17 others but didn't make the final draft.

Mrs Engbers appealed against the refusal of planning permission in June 2014 and a public inquiry was held over Christmas.

Inspector Ian Jenkins found in the district council’s favour but Mrs Engbers then took her case to the High Court and the appeal verdict was overturned.

A judge agreed that Mr Jenkins hadn’t warned her that highways issues would sway his judgement so she didn’t have a fair chance to present her case. As the case was continuing, Mrs Engbers submitted another proposal to the district council for 95 homes, which she argued was “greener”.

The council’s planning officers recommended approval, saying the authority had failed to secure enough immediately available housing land to meet the next five years’ demand and this invalidated the neighbourhood plan.

But members of the planning committee rejected the scheme last year, saying the site wasn’t in the plan and reiterating the road safety concerns.

Mrs Engbers then decided to appeal this decision rather than the earlier application.