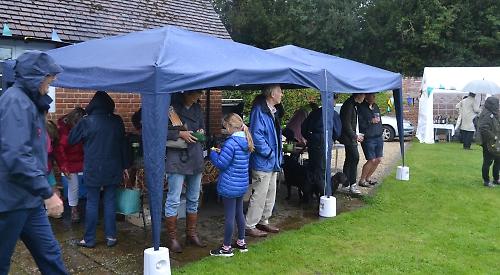 Organisers of Remenham fayre and Greys fete praised those who braved the heavy rain that fell all afternoon.

More than 150 people visited the event at Remenham parish hall, which featured a produce, arts and cookery show, a dog show and children’s races.

Other attractions included a tombola, barbecue, raffle, crockery- smashing, coconut shy and games including splat the rat, hook-a-duck, knock down the tin can and skittles.

Many guests took shelter in the parish room, where they enjoyed tea, coffee and cake organised by Remenham WI.

There were about a dozen entries into the dog show, which was judged by Melanie Healey, who runs dog training classes at the hall.

The children’s races took place in the hall garden and included sack races and three- and four-legged races.

Many parents stood under gazebos and umbrellas while they watched and listened to the commentary by show compere Barry Rosier.

All the money raised will go towards improvements to the hall, which needs roof repairs.

Liz Cope, one of the fayre organisers, said: “The amount of support we had considering the weather was unbelievable.

“The Met Office said it was not due to rain until the evening but it started at lunchtime and did not stop.

“I’ve had phone call after phone call from people saying how much they enjoyed the fayre.

“The bric-a-brac and tombola did very well and so did the bar and the barbecue. The kids stayed out in the rain and played on all the games — I don’t know how they did it.”

Meanwhile, visitors sheltered under umbrellas at the fete at Greys Court, which opened early especially.

There were dozens of stalls selling items including toys, bric-a-brac, books, produce and cakes. The villagers running them were served hot drinks to help them keep warm.

Traditional games included welly wanging, a coconut shy and splat the rat. For the “balls in the bog” game competitors had to throw tennis balls into old toilet bowls.

There was also a teddy bear zipline, where children chose a cuddly toy to slide down a wire from the Great Tower attached to a coat hanger. Other attractions included arts and crafts and face-painting stalls, a bottle tombola and a food stall run by the Maltsters Arms pub offering drinks and hot food including burgers and hot dogs.

The South Chiltern Beekeepers’ Association and the Henley Literary Festival also had stands.

Music was provided by the Goring and Streatley Concert Band. Later in the afternoon there were children’s races followed by prize-giving.

The fete raised £4,000, which will go towards the upkeep of the village hall and St Nicholas’ Church in Rotherfield Greys.

Susan Hems, who chairs the fete organising committee, said: “The weather was a bit of a disaster but I’m overjoyed with the number of people who turned out regardless.

“It was a case of British stiff upper lip despite the weather and enjoying it anyway. In the circumstances, I think we did really well and there was a great atmosphere.

“People came out to support the event, which restores your faith in the British public.”

She singled out the band for praise, saying: “They could have called and said they did not want to perform because of the weather but they came anyway and we are grateful.”