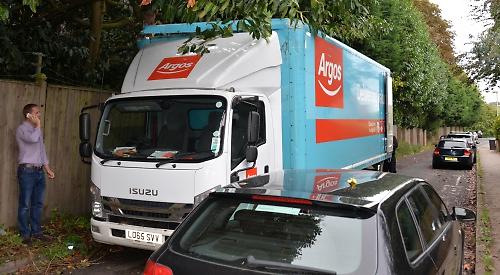 A HENLEY street has been shut by police this afternoon (September 6) after a lorry became stuck on an overhanging tree branch.

The Argos delivery vehicle was driving around parked cars in Hop Gardens when it struck the branch, which is part of a tree on the Friar Park estate, at about 1.30pm. The bodywork buckled and the branch was partly embedded in the front corner of the roof.

Fire crews were called out to check that the tree was not at risk of collapse and they confirmed it was safe. Now the estate's management team have called out a tree surgeon to cut the branch down safely.

The road is expected to re-open in a few hours.