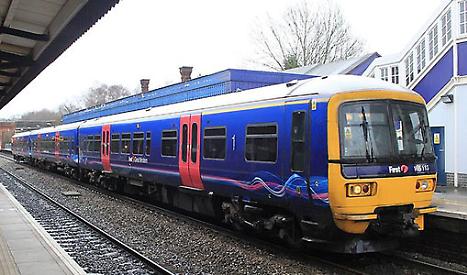 PASSENGERS have criticised a new early morning train service on the Henley branch line, saying it is overcrowded.

The old 7.42am direct service from Henley to Paddington, which took 45 minutes, was replaced on Monday by a new service leaving Henley at 7.38am and requiring a change at Twyford but giving a total journey time of 43 minutes.

The service has two carriages as far as Twyford, where passengers change to an eight-car train coming from Didcot.

Great Western Railway says that due to a lack of diesel rolling stock, the two-car shuttle will be run on the branch line until the new when the new electric trains will be used on the main line.

But commuters say the trains are too short for the line and could lead to some passengers missing the connection at Twyford.

Patricia Mulcahy, of the Henley Branch User Group, said: “Those who were not expecting this change will have had an unpleasant surprise. Two cars are not sufficient for this crowded service.

“The only remaining through service from Henley to Paddington is the 7.08am, which will also cease to be a through service at the end of December. None of these changes branch line users. GWR’s strategy is to maximise the use of its trains by ‘cascading’ trains to the West Country.”

Mrs Mulcahy said the user group raised the issue with Department Transport officials at a meeting last week to discuss possible future franchises on the line. GWR’s contract is set to expire in April 2019.

She said: “Among other things, we explained that two cars are insufficient at busy times and stressed the importance of maintaining journey times equivalent to those provided by the current semi-fast services.”

Philip Meadowcroft, who runs the Wargrave User Group, took several trains between Henley, Wargrave and Paddington on Monday to test the new service.

Mr Meadowcroft said: “The two-coach service is more densely packed than a Bombay train. It was just dreadful. I counted about 100 people on the Twyford station, joined by at least 200 on the two-coach train, so there were 300 people to board the train coming from Didcot and it left three minutes late as they couldn’t board quickly enough.”

He said many passengers on the train from Twyford to Paddington were forced to stand while the first two carriages were restricted to first class passengers but were almost empty.

“It has started badly for reasons no other than GWR’s failure to sort out its rolling stock,” said Mr Meadowcroft. “Knowingly putting on a two-car train on the branch line is madness.

“But the six-car train from Twyford is comfortable, so if they get that first bit right it should be easier and the second part is probably just teething troubles. Why not declassify one first class carriage? It’s being pragmatic.”

Louise Baker, who lives in Henley and commutes to London, has started a petition to restore the 7.42am direct service.

She said: “The 7.42am train is no longer direct, it’s now the 7.38am with a change at Twyford and it’s as horrendous as it sounds. Considering the £410 monthly it’s just ridiculous. We don’t even get a seat from Twyford and it puts us all in a foul mood at the start of the day with the usual scrum to get on the train first. It’s the same on the way home.

“For most people, like me, we now have to stand in uncomfortable conditions on the train to work, on the Tube and on the way home and pay for the privilege. I don’t think they should be allowed to get away with this.”

Gary Butler, from Shiplake, said: “The 7.08 is grossly overcrowded and hot as the cars are no longer air conditioned. This shows a lack of concern by GWR for travellers from Henley, Shiplake and Wargrave.”

Neil Gunnell, of Henley Trains, blamed the problem on the decision last year to defer electrification of the branch line indefinitely in order to save money at both the Department for Transport and Network Rail and said he had flagged this up with GWR.

A GWR spokesman said the shuttle would be increased to a three-car service in January, adding: “The use of more electric trains will free up diesel rolling stock and allow us to add the extra carriage on the branch line.”