Pupils and parents say smarter new uniform has the edge 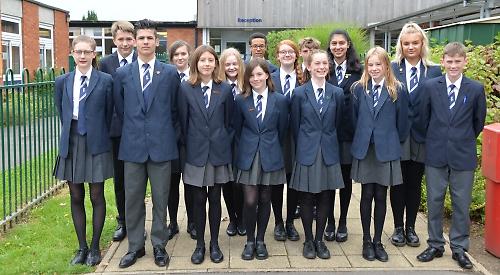 PARENTS and pupils have praised the introduction of a new uniform at Chiltern Edge School in Sonning Common.

It is part of a wider range of improvements being made to the secondary school in Reades Lane after it was placed in special measures in April following an Ofsted inspection report in which it was rated “inadequate”.

Oxfordshire County Council, the education authority, had threatened to close the school but agreed in July to give it until October to show “green shoots” of improvement.

All children were expected to wear the uniform when the new term started on Thursday last week.

Every student was given a new school tie, which was designed by a group of pupils, free of charge.

She said: “We wanted to be more businesslike and professional at school.

“We wanted the school to feel like a serious place for learning and make a clear distinction between social time and learning time. I’m proud and impressed with our students as they look amazing.

“The parents could buy the items from Marks & Spencer or Harvey Nichols but it would not look any different from Asda or Tesco. All the students look fabulous.” Miss Green has already received emails from parents and residents saying the new unifrom looks much smarter than the old one and students have welcomed the change too.

Hollie Strzyzewski, 14, said: “The uniform is really smart. I take a lot more pride in coming to school than I used to and feel like I work better in lessons.”

Luca Lopes, 15, said: “It makes the school seem much more professional and is definitely a lot better than what we had before.”