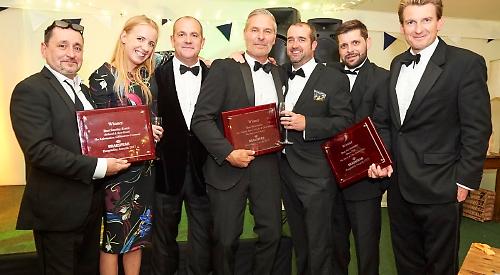 TWO pubs in the Henley area have won hospitality awards.

Samantha Murray and Richard Grant, of the Reformation pub in Gallowstree Common, took the prize for the best Sunday lunch while the Perch & Pike in South Stoke was named the best all-rounder.

They were each presented with a plaque and cheque for £500 at Brakspear’s annual awards dinner, which was held at the Crooked Billet in Stoke Row and attended by 110 company licensees, head office employees and suppliers.

All 130 Brakspear pubs were considered the awards.

The Reformation was praised by judges as an “unassuming country pub with an impressively considered Sunday lunch and a welcome to be proud of”.

Ms Murray said: “Our reputation for serving a great Sunday lunch is a very important to us and we get wonderful feedback from customers. We’re delighted to have won this award against some strong competition.”

The best all-rounder award is given to a tenant who achieves consistently good results across all areas of their business.

He said: “We just try to be everything a village pub should be, serving fresh, seasonal food and great beer with a warm welcome.”

Brakspear chief executive Tom Davies said: “Recognising and rewarding licensees who excel either in one area, or across the board, is something we take seriously, with a robust judging process involving independent judges.

“Every year, the awards shortlist reminds us of the talented tenants we are lucky enough to have running pubs with us. Choosing this year’s winners was far from easy and they should all be proud of their achievement.”