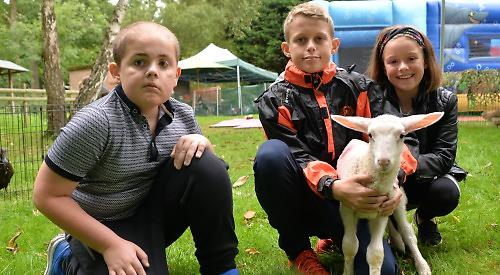 A BOY who recovered from a brain tumour was among those to attend a charity day at Camp Mohawk in Wargrave.

Charlie Ilsley, 10, was given just weeks to live in 2015 before doctors removed the growth. He then spent much of the following year in hospital, undergoing four bouts of chemotherapy.

He has since been given the all-clear and is on the mend, putting on weight and growing his hair back.

Charlie, along with his parents Toni and Mark, of Buckingham Drive, Emmer Green, joined 10 other families at the event at the centre for children with special needs, which was organised by the Brain Tumour Charity.

Youngsters took part in activities including swimming, navigating an inflatable obstacle course and visiting some of the centre’s facilities such as a sensory garden, petting zoo and indoor sensory rooms.

Mrs Ilsley said: “Charlie had a fantastic time and it was great for him to meet other children living with brain tumours. After you hear those devastating words, ‘your child has a brain tumour,’ you feel isolated and alone. Charlie’s latest scan was clear and he has responded really well to treatment.

“Following surgery, he developed posterior fossa syndrome so he has some side-effects. However, he’s walking again and is back at school. We are just grateful he’s doing so well.

“It gives me hope seeing other children further down the line of recovery.”

The Ilsleys are also supporting HeadSmart, a campaign run by the charity to raise awareness of the signs and symptoms of childhood brain tumours and to help diagnoses to be made more quickly.

Elissa Coster, children and family services manager for the Brain Tumour Charity, said: “It was brilliant to see Charlie and the other children and teenagers having fun.

“Our family days aim to let them and their siblings feel like kids for the day, away from the daily stresses of living with a brain tumour. They also give mums and dads the opportunity to meet up with other parents facing similar challenges and share their stories.”