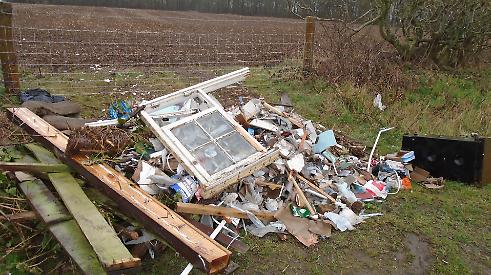 A MAN who illegally dumped building waste in four villages in the Henley area has been ordered to pay more than £5,000 after repeatedly being caught on CCTV.

When the 34-year-old appeared at Oxford Magistrates Court on September 12, he pleaded guilty to two charges of illegally dumping waste, two of failing to prevent waste escaping into the environment and another of transporting it without a license.

The bench heard that full tipper loads of construction waste were dumped in the first three villages between March 1 and 15 last year.

A vehicle was first spotted on CCTV dumping waste on Church Road in Dunsden Green, then again nine days later at a nearby site in Shiplake. Evidence left at Shiplake and the scene of the third fly-tip in Mapledurham was traced back to a builder who confirmed he had paid Smith to remove the waste.

Three months later, while these incidents were being investigated, more builders’ waste was dumped at Valley Farm in Bix. In the run-up to this offence, a vehicle was caught on CCTV loading waste in Woodley then driving it through Maidenhead and Henley.

In a separate case on the same date Waldemar Oryszczak, 48, of Kingsley Close in Reading, pleaded guilty to fly-tipping construction waste at Drawback Hill in Harpsden, which backs on to Blandy Road in Henley, in March 2016.

Councillor Tony Harbour, the district council’s member for environmental health, said: “Both cases involved people transporting waste into South Oxfordshire and then deliberately dumping it in a rural area.

“This is a malicious and selfish act which blights the landscape, costs thousands of pounds to clean up and investigate, and is potentially dangerous to any individual or wildlife that comes into contact with the rubbish.

“We will not hesitate to use any evidence necessary, such as CCTV footage, to track down offenders and bring them to justice.”

Information about fly-tipping should be reported to the council on 01235 422403.