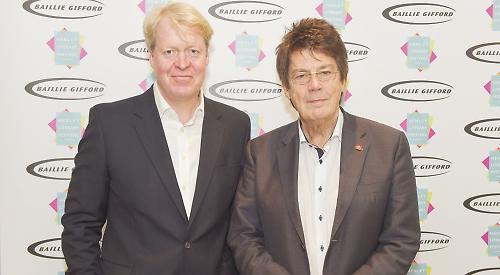 PRUE LEITH says she is delighted by the success of the new Great British Bake Off — and has been taking advice from her predecessor Mary Berry.

The cook and author was speaking during the Henley Literary Festival, which began on Monday and ends on Sunday.

Scores of well-known authors, writers, journalists, broadcasters and celebrities are speaking at the event, which is in its 11th year.

Organisers say they have sold a record 20,000 tickets to the 160 talks, workshops and performances.

Leith, 77, was discussing her new autobiography Relish during her appearance at the Kenton Theatre on Wednesday.

She had to write another chapter for the book after agreeing to join the Bake Off team after it switched from the BBC to Channel 4 earlier this year.

The eighth series, which started in August, still features judge Paul Hollywood while Leith has replaced Berry as a judge and Sandi Toksvig and Noel Fielding have taken over as presenters from Mel Giedroyc and Sue Perkins.

Leith told the Henley Standard said: “I absolutely love it and find it terribly easy because my role is totally unscripted so it’s not as demanding as it is for Sandi and Noel.

“They have to work pretty hard to come up with jokes whereas Paul and I just turn up and say what we like. It’s a great team and we nearly always have supper together while filming.

“It’s a wonderful show because nobody is trying to humiliate anyone. It’s not like we bring people on who can’t bake just so that we can laugh at them.

“It’s been such a success because people want to relax and feel like they’re among friends, which is why there was very genuine upset when Mary and Mel and Sue left.

“People almost felt betrayed that they weren’t getting familiar faces but I’m pleased that most people believe we’ll do instead! We’ve had amazingly good press and terrifically good viewing numbers — and long may that continue.”

Leith said she is good friends with Berry, who lives in Henley and was due to appear at the festival today (Friday).

She said: “Before I signed on the dotted line, I actually rang her up to ask what Paul was like and she assured me he was great to work with.

“Mary has been very sweet and has emailed me a couple of times to say I’m doing really well.”

Leith has appeared at the festival several times before and said it was one of her favourites.

She said: “I’ve been coming for years and always enjoy it. Living in the Cotswolds means it’s not such a big shlep and it’s one of the few festivals where a lot of people buy books.

“I don’t know if it’s because Henley residents are big readers but I always sell the most copies here and at the Borders Book Festival rather than some of the larger events.

“Like most guests, one of the things I enjoy most about festivals is getting to see other writers. Writing can be a very lonely business so it’s rather a treat.”

Journalist Victoria Derbyshire, who has a current affairs show on BBC2, revealed on Tuesday that she would be marrying long-term partner Mark Sandell after 15 years together.

Ms Derbyshire, who has two sons, Joe and Oliver, with the producer, said she asked him to marry her following her breast cancer diagnosis in 2015.

“Obviously he was joking, it was black humour. It released the tension in me and we had a bloody good laugh.”

“I swung from being quiet furious and indignant and ‘I haven’t got time to have cancer, I’ve just started this new programme’!”

“I was absorbing every one of them [her sons], every bit of their chatter, because there might not be many more occasions to go out for lunch in the summer holidays.”

She was in tears as she recalled calling her mother in Bolton.

Ms Derbyshire said: “She said, ‘I wish it was me who had cancer because it’s not fair, it’s you’.

“Everything that I was doing was in case I died so we roasted a chicken and I was showing Joe how to carve a chicken. I was showing Mark how to put salt in the dishwasher because he’s got no idea!

“I had absolute faith the surgeon would scrape every last bit of cancer out of me but had an irrational fear I wouldn’t wake up from the anaesthetic.

She put them in a bedside draw and told Mr Sandell to give them to the boys if anything should happen to her.

After a four-hour operation she then had sessions of chemotherapy and radiotherapy. She lost two thirds of her hair, which she said was “distressing” and “depressing” and she looked like the late comedian and actor Max Wall.

She finished her treatment in May 2016 and is now cancer free.

She said Britain was “lucky” to have the health service, adding: “If you want to give the NHS more money you can find the money. We have got to keep it, we have got to look after it.”

Broadcaster and author Melvyn Bragg criticised the “disgraceful” decline in young people reading the Bible, saying those who think it is too complicated were “wimps”.

The 77-year-old atheist, who appeared at the Kenton, said that every school and church should read the text each month, otherwise children would be “deprived” of the depth of language.

Naturalist and palaeontologist Professor Richard Fortey, who lives in Henley spoke about his book The Wood for the Trees: A Long View of Nature from a Small Wood, which documents a notional year in the life of a four-acre plot in Lambridge Woods on the outskirts of town, which he bought in 2011.

He warned that bluebell woods could die out because of the “poisonous” emissions from diesel cars, which had led to the vigorous growth of brambles and nettles in woodland areas.

Royal biographer Penny Junor claimed the Duchess of Cornwall thought Prince Charles was “a bit of all right” when she was first introduced to him.

Speaking at the town hall on Monday, she claimed Camilla might never have got together with Charles had her first husband not cheated on her with Princess Anne.

Ms Junor said Camilla wanted to teach a lesson to Andrew Parker-Bowles — who was her boyfriend at the time — and as a form of revenge she enjoyed her first “fling” with the Prince in the early Seventies.

Charles Spencer, the brother of Princess Diana, enjoyed a reunion with DJ Mike Read, who lives in Henley and he has known since 1982, at the Kenton.

Read played at his 21st birthday and enjoyed himself so much that he overslept and missed presenting his Radio 1 breakfast show the next day.

Programming director Tom Ryan said: “It’s going pretty smoothly. It’s always nice getting feedback from the audiences and they seem very happy and the authors too — they seem to be selling lots of books.

“I know the bigger names get the focus but it’s nice that everyone seems to be doing well.”

Mr Ryan said about 60 events had sold out, including 11 alone on the opening day.

He added: “It’s giving something to local people to enjoy but, equally, bringing people into the town.”