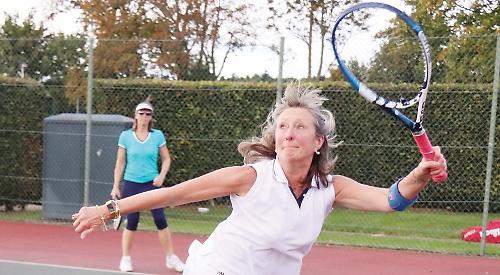 MORE than 70 women took part in a charity tennis tournament.

The doubles competition was organised by the Henley branch of the National Society for the Prevention of Cruelty to Children and raised more than £3,000.

The matches were played on nine courts in Henley and Shiplake.

The winning pair from each court then played a knockout format at Shiplake Tennis Club.

The tournament was won by Clare Pelling and Sandra Greenslade, who beat Caroline Cousins and Joanne Gray in the final.

The players were served lunch at Shiplake Memorial Hall, where there were stalls selling bread and cakes and a raffle to raise money.

“We played an American-style tournament where each pair played seven to nine games and then came back for the finals. All the winners from each court got a medal and the overall winners also received a shield.

“Everyone had a great time and the finals were a very good standard.

“We had some social players but also some very competitive matches with club players.”

The raffle prizes included a free lunch at the Bottle and Glass pub in Binfield Heath, a leather tennis racquet cover, a tour of Luscombe’s winery and chocolate tennis balls from Gorvett & Stone.

The branch’s next event will be an autumn walk on Thursday, October 12 from 2pm, followed by afternoon tea at Rotherfield Greys village hall.

Its Christmas fair will be held at Phyllis Court Club in Henley on Thursday, November 23 from 9am to 4pm. Entry costs £5.