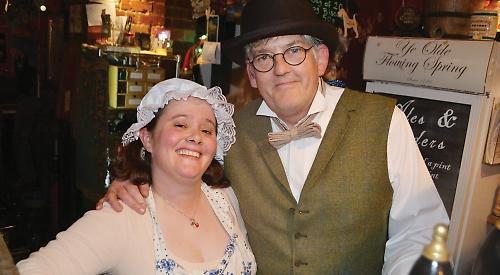 CUSTOMERS of a pub in Playhatch stepped back in time by dressing up for a Victorian street party on Saturday night.

Husband and wife Nick Willson and Hazel Lucas, who own the Flowing Spring, decided to make the most of the closure of the A4155 Henley Road, which goes past the pub.

They encouraged regulars to dress up 1800s-style and imagine themselves back in the reign of Queen Victoria.

Many of the 80 revellers came wearing period dress, including top hats, flat caps and waistcoats, and wore false beards and moustaches.

The pub’s frontage featured hay bales, old barrels, a cart and lanterns, while The Curious Sounds, from Reading, performed music from the era.

The couple, who purchased the freehold of the pub from Fuller’s in July, served a Victorian-themed menu of roast goose and pork, apple rolls and clam and salmon stew followed by spotted dick, gypsy tart and a pancake with lemon and sugar. There were also pots of clams, whelks, mussels and oysters.

Mr Willson, who has run the pub with his wife for seven years, said: “It was one of the most amazing and entertaining nights we’ve had.

“The number of people who dressed up was fantastic. They made such an effort.”

A 100-yard stretch of the A4155 between Spring Lane and the Playhatch roundabout has been closed for repairs which are expected to take 10 weeks, ending on November 6.

Oxfordshire County Council, the highways authority, is reinforcing the westbound lane of the carriageway with a sheet pile retaining wall after it collapsed earlier this year due to previous flooding.

Mr Willson said: “The party was inspired by the road closure. We thought, ‘we have got to turn this into a positive’ and that it would be an ideal time to appreciate the pub as it might have been more than 100 years ago with no traffic and noise — just peace, tranquillity and the countryside.

“It’s in the countryside and it’s nice and peaceful. We have got these old photographs of the pub with the old benches out the front and the veranda.

“We imagined our customers sitting out there with jugs of ale and horses going past and we thought it would be nice to try to recreate that for just one night.

“We had the band playing in the road and everyone in Victorian costumes just enjoying the frontage of the pub and the atmosphere was fantastic.

“We’re so proud that it worked. Isn’t it great that people embrace these events with such enthusiasm and made the effort?

“When we first came here the pub was dead and we vowed from the start to have constant energy and motivation just to keep people wanting to come. You can never just expect customers, you have to give them that kick, that incentive.”

Paul Hancock, from Playhatch, said: “Everybody has made a real effort since the road closed to support the pub. It’s our local with good food, good beer and good company.

“We live just down the road so have got no traffic going past the house, which is wonderful.” Doreen Mack, from Caversham Park Village, said: “It has been our local pub for about 40 years and we just like to support any function that’s put on.”

Colin Bourne, who lives in nearby Spring Lane, said: “It’s really important to have a local pub when so many places are losing theirs.”

Joanne Harris, from Shiplake, who went with her husband Jon, said: “We like to support everything that Nick and Hazel do — they would have been really miserable if we hadn’t turned up!”

“Obviously, the closure affects Nick and Hazel financially but they are making the most of the situation and turned it into an opportunity rather than saying ‘let’s just hunker down and get depressed about it’.

“I think it’s a testament to the pub they run that they have so many people dressing up and supporting the evening.”

Jim Whitehead, from Sonning, said: “I wish it was this quiet all the time!”

Lorelei Pilcher, from Charvil, said: “The landlady is my sister-in-law so I obviously wanted to come.

“It’s fun to dress up — I’ve never been to a Victorian night before. We actually get to go out the front for once and not have vehicles everywhere.”

During the 1800s the Flowing Spring was owned by Hewett & Co, a brewery based in Shurlock Row which had an estate of around 40 pubs.

In 1899, Simonds of Reading purchased most of the estate and paid £1,275 for the Flowing Spring.

Simonds was eventually bought up by Courage and then, in 1980, Fuller’s bought the pub as Courage underwent a huge sell-off.