Lawyer rides from London to Paris on old child's bike 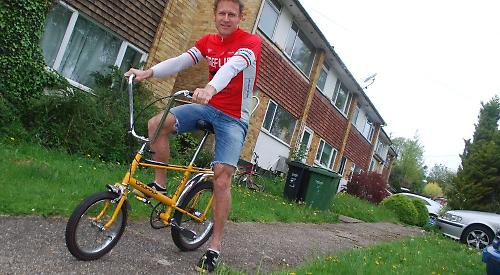 A SOLICITOR from Henley raised almost £2,200 for charity by riding from London to Paris on a children’s bicycle from the Seventies.

Matt Richardson was one of 200 cyclists who completed the 310-mile challenge, setting off from Greenwich and arriving at the Eiffel Tower four days later.

He was raising money for the blood cancer charity Bloodwise in honour of his father David, who died of cancer in 1999.

He rode a 1972 Raleigh Chopper, which has only three gears on its rear wheel and none on its smaller front wheel.

Mr Richardson, 51, of Deanfield Avenue, has previously ridden the machine up Mont Ventoux in France and the Stelvio Pass in Italy as well as setting a world record for the longest distance covered in an hour on a Chopper when he completed 69 laps of the Palmer Park velodrome in Reading.

He said his latest challenge was the toughest to date as it was the longest by far and the bicycle is difficult to ride up hills. On the third day he was so exhausted that he considered giving up.

Mr Richardson, a co-founder of the GS Henley cycling club, said: “I’ve never done more than a day of riding the Chopper and it got progressively harder until, by the end of the second day, I really wasn’t interested in carrying on.

“The third day was utterly horrific because I’d had enough and if I’d been doing it by myself I honestly can’t say whether I’d have carried on.

“However, being with a large group swept me along and I just carried on.

“I wasn’t injured in any way but I was totally exhausted and at one point I broke down crying because I was so tired. It was cold, it was raining and the hills just seemed to go on and on.”

Mr Richardson, who wore Seventies-style trainers and denim shorts, found it even harder because he had the early symptoms of a heavy cold, which fully developed when he arrived back in Britain.

He said: “It was a really filthy cold but, as most people who do sporting events will tell you, you can put it off by just powering through. I put it off for four days and came down with it properly afterwards.

“Although it sounds silly now, the relentless effort and seemingly hopeless task of riding such a completely unsuitable bike so hard and for so long reminded me of how desperately my father fought when he was dying.

“I remember him telling me that every day felt like running 10 marathons. He was a fantastic sportsman and only 55 when he died so I can only imagine how hard he battled and, even now, I think about that almost every day.

“My distress was put into perspective when I spoke to another cyclist later on. He told me he was riding in the slow group to look after his brother, who had leukaemia.

“The final morning was a lot easier because the ride ahead was shorter and I’d come so far that I knew I could just grit my teeth and get on with it.

“Coming down the Champs-Elysées with all the roads closed just for us was extraordinary — quite apart from the charity aspect, I’d recommend it to anyone just for the experience.”

The cyclists were accompanied by a support crew offering water, sports drinks, physiotherapy and repairs to their bicycles. Mr Richardson was given a massage at the end of the first day and one of his pedals was fixed after it became loose the next day.

He said: “It was incredibly well-organised and ran like clockwork. It was just like being a pro cyclist for four days — apart from the fact that I was riding a 20kg children’s bike with stupidly short cranks and only three gears.

“The others had proper racing bikes so I definitely stood out. Some of them had already heard of me but others had no idea and were either amused by it or expressed sheer disbelief that I would or even could do it.

“However, as the days rolled by and I kept on going they were very kind and I even got a standing ovation at our farewell dinner that night. I’ve never had that before and probably never will again!

“I was extremely relieved to finish it but, although I haven’t got any firm plans, I will definitely be doing another challenge on the bike next year.”

Mr Richardson has now raised more than £12,000 for the charity.

To make a donation, visit
www.justgiving.com/raleigh-chopper-london-to-paris