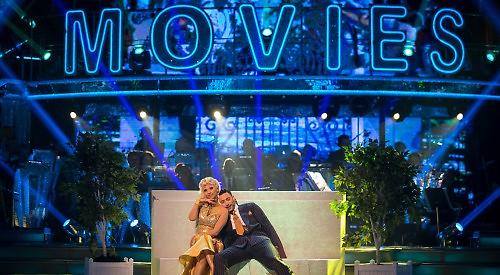 DEBBIE McGEE has been accused of breaking the rules of Strictly Come Dancing.

The radio presenter, from Wargrave, was penalised during Saturday night’s show for being out of hold for too long during her routine with professional dance partner Giovanni Pernice.

Then she accidentally revealed the name of the latest contestant to leave the show hours before it was aired on television.

She told listeners to her BBC Berkshire show on Sunday morning that she was “very sad” to see the Rev Richard Coles booted off.

Then, realising her mistake, she tried to cover it up with an anecdote.

“Very sad to see Richard go, the Rev Richard,” she said. “Oh — or, or going. He fell over at one point and had to be treated and everything else, so now we’re waiting to see what’s going to happen in the results show tonight.”

The results show is recorded on a Saturday after the live show but is not broadcast until Sunday night.

The live show had a movie theme and McGee wore a sparkly, gold calf-length ballgown for a quick step to Let’s Call the Whole Thing Off by Ella Fitzgerald.

The routine was said to have been inspired by the movie Shall We Dance?, which starred Richard Gere and Jennifer Lopez.

The pair were awarded 29 points out of 40 by the judges, which was a comedown from the 34 points they scored the previous week with a Viennese waltz to top the leader board.

Shirley Ballas said she didn’t like the start, where McGee was seen sitting on a park bench reading a copy of “The Strictly Times” when Pernice took it from her and then she snatched it back, saying: “You’re a dancer so you could get on with it.”

But she praised McGee’s “nice scatter chassé”, her movement across the floor and her light footwork.

Bruno Tonioli described the routine as “light, frothy, glossy” and in the Hollywood style and said that McGee must have been watching Ginger Rogers as she had similar mannerisms. He said: “She had these dances down to a tee. She always did a back look all the time and you have got that spot-on! I love things like that. That detail tickles me. I loved it.”

Darcey Bussell said McGee’s dances were “constantly surprising” and praised how she used her neck while in hold and how she made the steps look effortless.

She added: “Not making a big deal of a step, when you go into something difficult, that is an art. Constantly, you are surprising us. I’m loving this. Thank you.”

Craig Revel Horwood said: “You broke the 10-second rule — you’re only allowed to have 10 seconds in the middle of a routine out of hold and that seemed a lot longer so I have to mark you down for that, I’m afraid. But you danced very, very well.”

The show’s co-host Tess Daly said to the judge: “You’re such a party pooper” to which Revel Horwood replied: “But rules are rules.”

Prior to her performance, the 58-year-old widow of magician Paul Daniels said she had found training for the routine difficult and had been putting in extra hours at the gym.

She said: “The main thing about the quick step is in the title of the dance. Quick. Step. And that’s my problem.

“Giovanni keeps saying that you have to be more like a Ferrari but he’s forgotten I’m vintage.

“This week has been a really tough week — it’s taken me a long time to get this and also to get the energy up to do it.”

He and partner Dianne Buswell paid homage to Flash Gordon in their Paso Doble routine in the dance-off against chef Simon Rimmer and his partner Karen Clifton.

Coles, a 55-year-old former pop star turned priest, said he was sorry to leave the competition but admitted: “I really can’t dance.”

Former JLS singer Aston Merrygold and his professional dance partner Janette Manrara — the bookies’ favourites to win the series — topped the leaderboard with a score of 35 out of 40 with their Cha Cha routine to Can’t Stop the Feeling by Justin Timberlake.