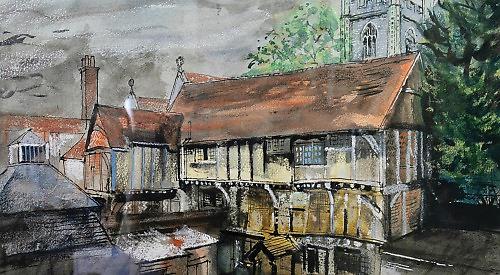 FIVE original paintings of Henley by John Piper are to be loaned to the River & Rowing Museum by the town council.

The works are currently hanging in the mayor’s parlour at Henley town hall but Mayor Kellie Hinton wants to give the wider public an opportunity to view them.

The paintings depict West Street, Temple Island, boathouses on the River Thames and the back of the Chantry House and St Mary’s Church.

It is hoped they will become part of the gallery dedicated to Piper’s work which opened at the museum in December.

Councillor Hinton said: “As Mayor, I’ve become a trustee of the museum and came up with a few different suggestions. One was to find a way of exhibiting the John Piper paintings of the town at the museum.

“This is fantastic local art that has real significance so why not let these beautiful paintings be seen?

“Unless I’m in the parlour entertaining people or having meetings, they are left unseen. Even I can go a week without even entering the parlour.

“Their rightful home is in the town hall but the people of the Henley and visitors should certainly have the opportunity to see these paintings in all their glory.”

Councillor Hinton said she hoped the paintings could be loaned to the museum in Mill Meadows during her year of office, which ends in May, but it might have to be formally agreed by her colleagues.

The museum created the Piper gallery last summer after an appeal which raised £22,000.

The painter and printmaker and his wife Myfanwy lived for more than 50 years at Fawley Bottom Farmhouse, where he built a pottery and a studio large enough to create full-sized designs for stained-glass windows.

Meanwhile, the museum is to undertake a community project to celebrate its 20th anniversary next year.

Other projects include relaunching its membership scheme next year as the “Henley Membership” so that supporters would be able to get more involved in its work and a river symposium.

Mrs Adams said the museum had also been carrying out improvements, including redecoration, new lighting in the car park and a project to improve its garden areas.