Food and litter left by visitors is disgusting, say councillors 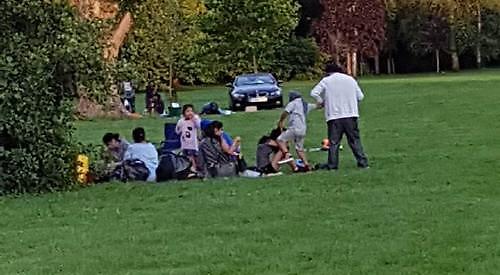 THE litter problem caused by visitors at two Henley beauty spots this summer is said to have been the worst ever.

Now councillors are to consider improving signage for Marsh Meadows and the Triangle.

A meeting of the town council’s open and green spaces sub-committee heard how:

⚫ Used nappies had been found discarded.

⚫ Hedgerows had been used as a toilet and toilet paper was seen blowing across the meadows.

⚫ Food had been left by people having barbecues and led to a number of dogs eating potentially harmful bones.

Committee chairwoman Councillor Sarah Miller said: “It’s awful some of the and they have just left it.

“I don’t like too much signage because that can look tacky but I think something has to be done about this.

“This has been happening for some time and it’s been getting worse — it was awful this summer. It’s absolutely disgusting.”

Councillor Sam Evans, who has a six-month-old golden retriever, said she was surprised that no dog had died as a result of eating discarded bones.

She said: “Some of them don’t even attempt to put it in a bin. You can literally see where they have been sitting and they have stood up and walked away.

“This summer has, no doubt about it, been the worst. I’ve never seen so many nappies being left lying around.”

Members were asked to consider installing more large covered bins and to have signs urging people to dispose of their waste properly or to ban barbecues, which are currently permitted only in Marsh Meadows.

Cllr Evans said more signs should be put up to “state the bleeding obvious”.

She added: “If people can take stuff down to the meadows, why the hell they can’t take stuff away with them is utterly beyond me.”

The sub-committee agreed to explore placing signs in the Mill Lane car park and others on trees in Marsh Meadows. It also agreed to a number of changes at the toddler and adventure playgrounds in Mill Meadows.

The ratio of swings at the toddler playground will be changed from four flat and two toddler swings to two flat and four toddler swings following a request from a parent who said there were not enough for toddlers.

At the adventure playground, the wooden fencing around it could be replaced as it’s reaching the end of its life and additional seating may be installed at the request of parents.

Mayor Kellie Hinton said she was in favour of more seating but Councillor Evans said she was “totally opposed” to the idea.

She said she went past almost every day and saw teenagers damaging the equipment.

“They are too big for it, it’s not designed for them,” she said. “If we had more seating there it’s just going to encourage them to go in the evenings.

“I wouldn't call it antisocial behaviour — it’s just teenagers being teenagers. I don’t think there’s any malice about it, they just want to have a laugh with their mates. There’s no consequence attached to their actions.”