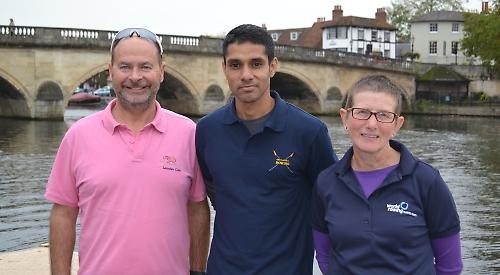 A ROWING coach from Sri Lanka spent a week learning from coaches at Leander Club.

Kushal Abhayaratne shadowed Mark Banks, director of rowing at the club, so he can use parts of the high-performance programme in his own country

It wants to be the leading rowing nation in Asia.

He monitored the training programme of the club’s elite athletes in their final preparation for the British Senior Championships in Nottingham over the weekend - the event, unfortunately, being cancelled due to Storm Brian.

Mr Abhayaratne visited other rowing clubs in the area as well as the River and Rowing Museum, the GB Training Lake in Caversham, and the Bisham Abbey National Sports Centre.

He said he will be implementing parts of the high-performance programme to the Sri Lankan squad that is being formed.

“I’ve been working with all the coaches in Mark’s team,” Mr Abhayaratne said.

“They have been sharing their experiences with me and I have been bouncing ideas off them. We are in the process of putting our national team together so I am learning about the high-performance aspects.

“Especially in terms of strength and conditioning, training and talent identification. We employ some techniques already but I have learned a lot more. It’s all been very valuable.”

Mr Banks said: “We are very keen to make this work for Kushal, as well as British Rowing and FISA, who have all worked so hard to help bring this plan fruition.”

“It’s step for all of us, but something we would like to repeat in the future assuming all goes well.”

Sheila Stephens- , development director of FISA, said: “This is the first time a club has ever done this – Leander has a very good structure and Kushal has shown himself to be very serious.

“Kushal was very engaged and we saw that he and his country had really demonstrated that they wanted to bridge the gap with the high-performance side in Asia.”

Annamarie Phelps,  of British Rowing, said: “The ambitious and professional coaching team has inspired and enabled many promising athletes to achieve their dreams by bringing together talent from across the country.

The initiative is the results of a partnership between Leander Club, FISA (the World Rowing Federation), and British Rowing.

It is a “curtain-raiser” to Leander Club bicentenary celebrations, which are taking place throughout 2018.