Refill your old water bottle instead of buying new one 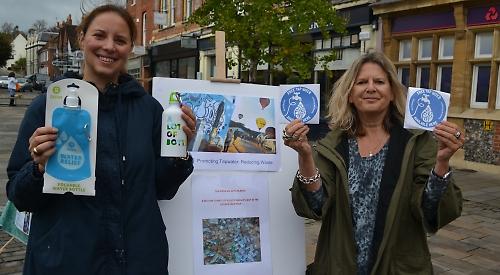 A CAMPAIGN has been launched in Henley to reduce plastic “pollution”.

Refill is part of a national initiative designed to make refilling water bottles as easy, convenient and cheap as possible by introducing refill points on every street.

It is being introduced in Henley by town councillor Sarah Miller and resident Julia Carey.

The pair will contact hotels, restaurants and other businesses to ask them if they would be willing to offer visitors free tap water to refill their bottles rather than buying new ones.

Businesses that agree will display a window sticker stating “Free tap water available here” and will be included in the Refill app, which has a map of participating businesses across the country.

The Eden Café at the d:two centre in Upper Market Place is already on board.

Mrs Carey, a jewellery designer, said that although water bottles could be recycled, their tops could not be and these were harmful to wildlife or ended up in landfill.

“I’d really like people to buy a reusable bottle and use that instead of buying a plastic bottle of water every day,” she said. “By having these stickers in windows it might just remind people and help educate.”

Earlier this year, she organised a screening of Bag It: Is Your Life Too Plastic?, an American documentary film about the effect of plastic bags and packaging on the ecosystem and marine wildlife, at the town hall.

Mrs Carey said: “I’m passionate about the environment and the film made me think that plastic is the thing I really want to focus in on.”

Councillor Miller said: “Julia approached me and had done all the research. She said, ‘I’d really like to get the council on board’.

“Refill is all about trying to reduce plastic pollution — the UK gets through 800 bottles a minute — and there’s a lot of it in Henley.

“We should be doing as much as we can to reduce it and we’re trying to spread the word and the town centre is where we’ll start. It’s all about us doing our bit.”

Refill began in Bristol and has been taken up in Cornwall, Dorset, Devon and Bath with other places expected to follow. Speaking at a meeting of the town council’s town and community committee, Cllr Miller said: “What I would like the council to do is just endorse this so that when we go around asking the businesses in Henley we can say, ‘the council is supportive’. There’s no cost involved to the council.”

Councillor Will Hamilton pointed out that the council didn’t refill its own plastic water bottles which it provides for members and the press at meetings.

He said: “We should practise what we preach. We use these bottles and don’t refill them. I know the chairman of this committee fought very hard to keep bottled water on the table during meetings.”

He said the council should use jugs of water.

Committee chairwoman Lorraine Hillier responded: “There was an issue with town hall and the lead piping. The water tasted awful and that’s why we use bottles.”

Councillor Julian Brookes said: “These bottles, if you just keep refilling without washing them, you get bacteria and apparently it’s one of the main sources of sickness in primary school kids. If we do it we need to get some advice from our GPs or the hospital but, of course, I support the initiative.”

Councillor Sam Evans said: “If we’re going to support it, let’s support it and explore two or three venues for water fountains.”

Businesses that the Henley Standard spoke to welcomed the initiative.

Neil Ainsworth, landlord of the Argyll pub in Market Place, said: “In principle it’s a very positive idea and we would be happy to support the campaign.

“The problem of plastics and pollution is something that we all need to consider for now and the future.”

Andrea Grecu, manager of Loch Fyne, also in Market Place, said: “I would personally says ‘yes’ but would have to check with my general manager.”

Vivienne Lee, who runs the Chocolate Café in Thames Side, said: “We give free tap water to people all the time. We’ve been doing it for years.

“People use my toilets for free without buying anything and they can have water bottles filled up.

“We have cyclists in on Saturday and Sundays and on weekdays as well as walkers. ”

The committee agreed to support the initiative and investigate further.

If you would like to know more about Refill or are interested in signing up, email Cllr Miller at cllr.sarah.miller@gmail.com