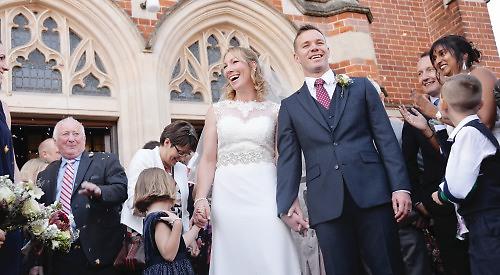 Flood, 37, who was the first female captain of Leander Club, arrived at the church in Reading Road in a classic VW Beetle and went inside to the sound of Pachelbel’s Canon in D Major played by organist Brian Gegg.

A welcome was given by Rev Glyn Millington, the minister of Christ Church, before the wedding ceremony, which was conducted by Rev Ian Anderson.

The bride was given away by her father John Flood, who lives in Guiseley, West Yorkshire, with his wife Bar.

The groom is the son of Frikkie and Hildegarde Bruwer, from Oudtshoorn in South Africa.

The bridesmaids were Kirsty Myles and Beth Cutting. Neave Bruwer was the flower girl and Jacob Bruwer was the page boy and ring bearer. The best man was Glenn Linnell.

The bouquets for the bride and bridesmaids were made up of white roses, to represent Yorkshire, where Flood is from, and protea, the national flower of South Africa.

Readings were given by Tash Stagg and Margery Pepper and the prayers were led by Glenn and Gina Linnell. The hymns included How Great Art Though, In Christ Alone, Before the Throne of God Above and Be Thou My Vision.

Flood is a devout Christian and member of Christians in Sport and has been a worshipper at the United Reformed Church for more than two years.

The wedding reception was held at Leander Club. The couple will live in Henley.