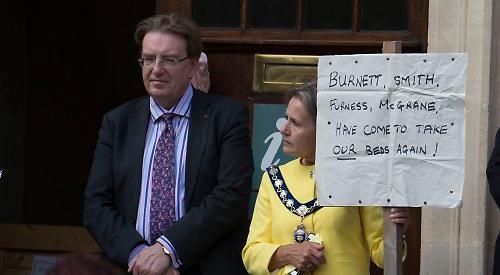 CAMPAIGNERS have accused John Howell of a “cheap shot” by suggesting that the fight to retain the beds at the new Townlands Memorial Hospital in Henley was not supported by residents outside the town.

Last week, the Henley MP spoke in the Commons about how the hospital was a model example for ambulatory care that allows more patients to be treated at home.

But he also criticised the campaign to retain the 18 beds that were promised in the original plans for the hospital before it was decided to have only five beds at the neighbouring care home as well as a new rapid access care unit at the hospital.

The proposal to remove the beds led to widespread protests, including the Henley Standard’s Save Our Beds campaign and a march through the town in 2015 which was attended by more than 2,000 people.

As a result, the Oxfordshire Clinical Commissioning Group agreed to have up to 11 beds in the home and increased the care unit opening times from three days to five.

However, Mr Howell told MPs: “In the villages outside Henley that make up the largest proportion of people in South Oxfordshire, there was enormous support for the proposals. It was only in Henley that people took the opportunity to complain about the lack of beds.”

Members of the Townlands Steering Group, which has campaigned on the hospital for 14 years and has representatives from all the parishes in the area, said Mr Howell was wrong.

Group chairman and town councillor Ian Reissmann said: “There is not much support, to put it mildly, for his views that the opposition to the bed closure was confined to a small minority in Henley.”

Peter Ashby, a retired Henley GP who lives in Nettlebed, said: “The sad thing is that John Howell regards the campaign as being very Henley-centric, despite us demonstrating that we represent the wider area around the town with other parishes and organisations.

“He has taken it upon himself to decide that the campaigners were really just looking after the interests of Henley itself, which was not the case. It’s a cheap shot.

“He should be fully aware of the right to represent people and the campaign we ran. The steering group did try quite hard to come to a compromise with the commissioning group after it had already made its mind up about getting rid of the beds without any consultation at all.

“The idea of the care unit and what it does was something we approved of, despite the commissioning group thinking we didn’t. We just thought we couldn’t have a unit like that without beds around it. We made suggestions that might have kept some beds in a ward together with the rapid access care unit but it chose to get rid of the beds completely and then spend money buying them elsewhere.

“I’m disappointed that John Howell chose to have a little kick at us as if we were troublemakers. Our motivation was to give Henley and the district the hospital it deserves.”

“The fact of the matter is there was enormous support in Henley too for the new care unit. Mr Howell won’t engage with the steering group, which is a body that is representative of all the parishes in the catchment area. That’s a great pity.”

Barry Wood, from Peppard Common, said: “Across there have been protests against the loss of beds. The difference in Henley was it was more vociferous because of the steering group. We were more aggressive about it than other areas so it didn’t fizzle out. Even today we are still suffering from a lack of beds.”

Mr Wood said the hospital still had an empty top floor since Sue Ryder decided not to relocate its hospice from Nettlebed.

He said: “John is always trying to assert that this is a wonderful hospital but a third of it is closed. He has put a positive spin on something that’s not working as well as it should be.”

Robert Aitken, of Bix and Assendon Parish Council, said: “It’s obvious that the original proposal by the commissioning group not to re-provision the Peppard ward was not nearly as good as what was finally delivered after pressure from the steering group.

“To say there was overwhelming support from areas outside Henley is probably wrong but there were some surgeries on the outer fringes which were either in favour or not concerned. This may be because they look out to other units instead of Townlands, while the lead GP at one had a role at the commissioning group.”

Mr Howell did not want to respond.