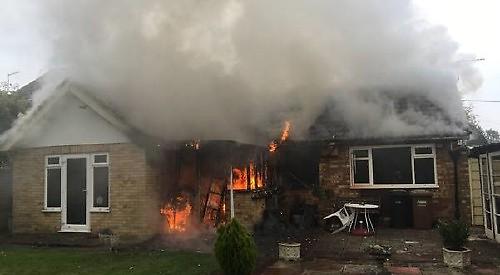 A 91-YEAR-OLD man suffered burns to his face and legs when a fire ripped through his bungalow in Benson.

He was alerted to the blaze at his home in Crown Lane on Friday morning when he heard his smoke alarm sounding.

He was injured escaping the property and also suffered smoke inhalation. He was treated at the scene before being taken to hospital by the South Central Ambulance Service.

Firefighters from Wallingford and Didcot were called to the scene at about 11.30am and could see smoke as they approached the property.

Additional fire engines from Abingdon and Slade Park, Oxford were called to the scene as the fire was developing rapidly.

Eight firefighters wearing breathing apparatus used four hoses to bring the blaze under control and prevent the fire spreading to the attached garage and neighbouring property.

The cause of the fire is currently under investigation.

Incident commander, station manager Darran Hookway, said “The male occupant was alerted to the fire because he heard his smoke alarm sounding. Unfortunately, during his he suffered burns to his face and legs and also suffered smoke inhalation.

“He was treated at the scene and conveyed to hospital by our colleagues from South Central Ambulance Service.

“The fire in the property involved all rooms and the roof and spread throughout the structure very quickly. I would urge members of the public to always get out, stay out and call the fire and rescue service if faced with a fire in their property.”