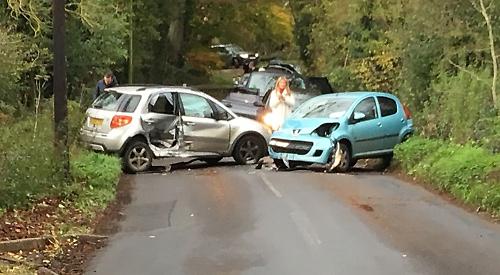 A CAR crash has blocked one of the main roads into Henley.

A silver Suzuki and a blue Peugeot collided at about 8.30am on Greys Road, between Highlands Farm and Rotherfield Greys.

The front of the Peugeot was buckled and the back right passenger door of the Suzuki was caved in. Both cars are partly on the roadside verges.

Debris from the two vehicles is in the road. Two fire crews attended the scene as well as police.

Vehicles were diverted to Henley via Gravel Hill.