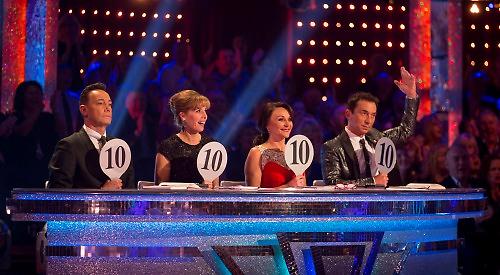 DEBBIE McGEE scored maximum points to retain her position at the top of the Strictly Come Dancing leaderboard for the third week running.

The radio presenter, from Wargrave, even had judge Craig Revel Horwood sinking to his knees in worship after her performance on Saturday night’s live show.

McGee, who celebrated her 59th birthday last week, was left speechless as Revel Horwood then hugged her. Her professional dance partner Giovanni Pernice responded by kissing him on the hand.

The couple performed a traditional tango routine, which is danced almost entirely in a close hold with intricate footwork and kicks, to the song I’ve Got A Feeling by the Black Eyed Peas.

McGee wore a floaty blue ankle-length gown and gold high-heeled shoes. After getting into hold, the pair worked their way around the dance floor with McGee extending and kicking her legs.

They were awarded 10 points by each of the four judges — the highest total in this series so far — to stay ahead of singer Alexandra Burke, who scored 39.

As the usually critical Horwood made his way back to his seat after falling at McGee’s knees, he uttered: “Amazing, amazing!” Co-host Tess Daly remarked: “That is an absolute first. We’re speechless.”

Judge Darcey Bussell said: “That was strange wasn’t it? Honestly, you gave me tingles down my back — that was extraordinary. You are on par with your professional. I don’t think I’ve ever seen a tango like that from a celebrity — amazing.”

Head judge Shirley Ballas said: “Debbie McGee, that was a beautiful international tango. You had fast feet, you had soft legs and, guess what, you had no rise and fall, so for me it was outstanding.

“Every week you are flying high and that was just unbelievable. Congratulations — that is one of the most difficult dances to do and you executed it first class.”

Bruno Tonioli said: “It was like watching a tango masterclass. Flawless.”

The couple then made their way from the dance floor up to the gantry to receive their scores only to be greeted by the rest of the celebrities and their partners bowing down in homage to Revel Horwood’s celebration.

Co-host Claudia Winkleman said: “Well done, that has never happened… Craig getting up and doing that. You have had a wonderful week. You found out that Ed Sheeran is a massive fan. Are you over the moon?”

On Sunday, she arrived on air 35 minutes into her BBC Berkshire radio show, eating peanut butter on toast and wearing a jumper which said “overslept” on it.

“What a week,” she said. “I really can’t believe what is happening to me. It’s just amazing. Last weekend, when I left the show, I actually went into Reading and had a wander around in a shop because I’m just not doing anything normal at the moment.

“I just felt that I needed to be a bit human and if I had gone home I would have just gone to sleep.”

McGee, the widow of magician Paul Daniels, said she had been rehearsing the tango all week.

“It was really hard to pick up,” she said. “What Craig was trying to explain is the judges are looking for pure technique. They do take into account whether you have entertained the audience but where the voters vote for who has really entertained them, the judges are all about technique. In the tango, every little bit of technique was the opposite to what I do naturally so your knees are sort of turned in.

“When you start off before you do the tango walks, we shall call them, my left leg is turned in like it is knock-kneed and your right leg is hooked under the guy’s thigh so your knees are kind of hooked together with your toe in line with your other toe.

“As you walk you have to bend down and walk with your legs completely bent and I just don’t do that. I felt a bit like a chimpanzee.”

McGee says she took Pernice to last week’s Pride of Britain awards where she received lots of messages of support.

She said: “You know I’ve lived in the public eye for a very long time and certainly from the Eighties to the mid-Nineties, when Paul and I were doing the magic shows, everywhere you went everybody knew who you were… but Strictly is something completely different. I suppose because it’s a competition maybe. I just can’t believe the reaction. At the awards, it was quite weird as Michael Ball, Alfie Boe and everyone was coming up to me, saying: ‘we’re all rooting for you, we’re all voting for you.’ It’s very special.

“I have had so many messages, especially with Twitter, where people can find you.

“I’ve had direct messages from all sorts of actors, actresses and people I’ve worked with as well, like the lovely Nigel Havers, saying they are all voting for me. It’s just so amazing. Of course, I’ve had a lot of women over a certain age, saying I’m inspiring them but as I’m walking around it’s right across the board. I’m getting teenage girls coming up to me and saying we want to be like you when we’re your age.”

On Sunday’s results show, JLS singer Aston Merrygold and his dance partner Janette Manrara, who were the bookies’ favourites at the start of the series, were voted off on the casting vote of Ballas.