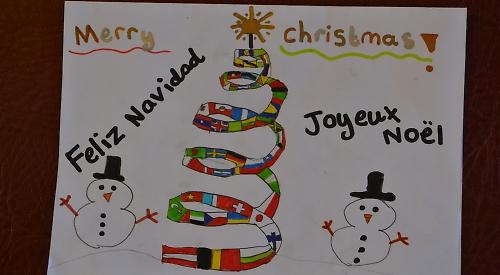 A GIRL has won the Mayor of Henley’s Christmas card competition with a design featuring three languages.

Lottie Baker, 11, a pupil at Valley Road Primary School, was one of more than 300 entrants.

Her card’s design captured the theme of “Christmas around the world” as it featured a Christmas tree made from flags of different countries and “Merry Christmas” written in English, Spanish and French.

Lottie said: “I feel really happy. My sister’s going to be like, ‘wow, I didn’t think you could draw’!”

The Mayor said: “It was really, really hard to choose between all the entries. We had tables and the floor of the council chamber filled with cards and the children had really embraced the theme.

“My eyes were drawn to Lottie’s card with all the flags and the shape of the Christmas tree and it made me smile. The ‘Feliz Navidad’ is probably why it stood out for me a little bit as my family all live in Spain.

Lottie will join the Mayor in turning on the lights on the town’s Christmas tree in Falaise Square at the Christmas festival on Friday, December 1. She also wins four tickets to this year’s pantomime, Robin Hood, at the Kenton Theatre.

The Mayor’s card will be printed by Higgs Group, publisher of the Henley Standard, which sponsors the competition, and more than 200 will be sent by Cllr Hinton.

Second place went to Beatrice Fraser, 10, from Badgemore Primary School, while third was Theo Decardi-Nelson, seven, who also attends Valley Road primary. They both win a selection of books from Primary Times.

Theo said: “I chose four flags from Australia, England, Germany and Ghana with ‘Happy Christmas’ in their languages.”

Tim Coulson, headteacher of Valley Road primary, said: “We encouraged everyone to enter. It’s a great opportunity and just taking part is a good, fun thing to do.”