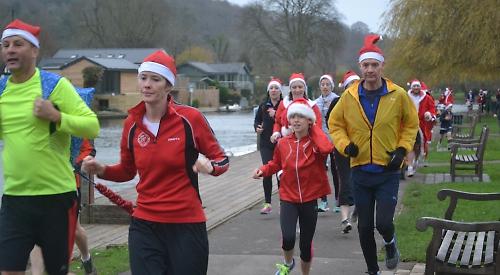 HENLEY’S Santa fun run will not take place this Christmas for the first time in six years.

The town council has cancelled the event on December 10, saying it costs too much to stage.

Mayor Kellie Hinton had planned to re-organise the run with a route that finished in the town centre but now it has been scrapped.

She said: “For various reasons the event did not work last year so I said we could perhaps re-do the route and try to make it work.

“We decided to do it as part of our family festive day and we were going to have it end in Friday Street with a road closure.

“We had to look if it was worth it for the amount it was going to cost to organise it and it wasn’t.”

Councillor Hinton said there had been negative feedback about the route, which has traditionally started and finished at Mill Meadows, used in previous years.

People had complained that it used back streets and did not take advantage of the town’s beauty spots.

She said: “We have a beautiful riverside but runners were not able to enjoy it.”

The Mayor plans to approach James Barr, who organises the Henley Parkrun, to see if a similar event could be run under its auspices.

Parkrun began in July and each Saturday participants run a 5km course around the perimeter of 40 Acre Field that includes a short out-and-back section of the Pack and Prime Lane bridleway.

Cllr Hinton said: “I have not spoken to anyone yet but maybe we could do something fun on one of the Parkrun days. People could wear a Santa hat.”

Mr Barr said: “The Mayor and town councillors have been very positive towards Parkrun so we would be happy to co-operate with them on this.

“If they came forward with a suggestion of one of the Saturdays, we could dedicate that to the Mayor’s Santa fun run and we would dress appropriately.”

Last year, more than 50 people donned Santa suits and other festive outfits for the jog of about two miles.

In other years the event has attracted more than 150 participants.

Prizes are usually given out for the fastest runners as well as for best fancy dress outfits for adults, children, teams and families.

The event raises for the Mayor’s charities and has made up top £500 in some years.

The event began in December 2011 when it was started by then Mayor Pam Phillips.

Mrs Phillips, of St Mark’s Road, recently announced that she hoped to save the annual Santa’s sleigh week, which was under threat after Henley Round Table, which organised it, folded due to dwindling membership.

The town’s other seasonal events will start with the Christmas festival and late-night shopping event on Friday, December 1.

This will feature a children’s parade, funfair rides, food stalls and entertainment as well as the switching-on of the lights of the 30ft Nordmann Fir tree in Falaise Sqaure.

The seventh annual Henley Living Advent Calendar will take place at various venues every evening from December 1 to Christmas Eve.

The first performance will be on the town hall steps and the last one at St Mary’s Church in Hart Street.

A festive family Sunday will take place in the town centre on December 10.