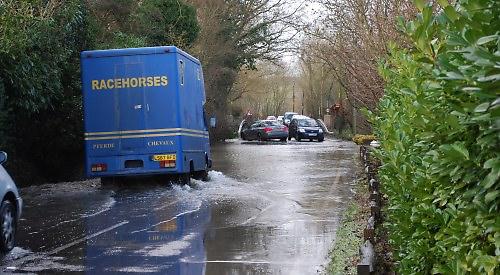 A £7.5 MILLION project to improve a road that is prone to flooding has suffered a setback before the design stage.

Oxfordshire County Council, the highways authority, wants to raise the B478 Playhatch Road, near Sonning, by about 40cm or 80cm at its lowest point.

But it has been refused a request for £550,000 from the Department for Transport’s Challenge Fund to pay for a design scheme.

It is the second time in two years that the council has been refused money by the Government to fix the problem.

The council says it will submit another bid, insisting that raising the road is the only solution.

The issue dates back to early 2014 when the road had to be closed for six weeks due to flooding from the River Thames which damaged the road surface.

The closure caused traffic disruption on surrounding roads at peak times and complaints by businesses in Sonning that they were losing trade.

In 2015 a site investigation and flood modelling were carried out but an application to the Government for £4.2 million was turned down.

The council was told it had to build a business case to demonstrate the economic benefits.

Councillor David Bartholomew, the area’s representative on the county council, said he was “disappointed” by the DfT’s latest refusal decision.

He said: “It’s so much money that it’s not something that can be accommodated out of local budgets but it is work of major local significance because when that road floods this corner of the county seizes up.

“It is of wider significance, which is why we feel we should get the funding.

“One of the problems in getting the money is that for a lot of the time the road is not an issue. It’s only when it floods and then it’s a very, very big issue.”

The council says that raising the road would reduce the risk of it flooding again from once in five years to once in 20 years.

It wants to improve the durability of the road with no increase in flood risk to nearby properties or businesses and to provide a “desirable economic benefit”.

It has calculated the cost to the economy of the road being unavailable and the benefits from reduced long-term maintenance based on the cost of recent repairs.

A council spokesman said: “Our approach will be to continue to seek funding for what is an essential piece of work if we are to prevent the kind of situation we had a few years ago when the road was flooded and damaged.

“It is important to be clear that any scheme to raise the road would seek to address any concerns local people have in the design phase.

“We want a solution that fixes the problem of flooding and certainly does not cause problems for anyone else in doing so.” Residents of Sonning Eye are concerned that the scheme could make flooding in the hamlet worse and that there would be considerable disruption during the work, which would require full or or partial closure for up to three months.

Cllr Bartholomew said: “In the immediate area there is a number of residents concerned that raising the road will make things worse for them by diverting flood water.

“I’m mindful of the conflicting views but in the wider area there’s massive support for this because people want to keep the road open at all costs.

“When it was shut there were people who couldn’t get to hospital, couldn’t their children to school or get to work on time.

“There’s only one option and that is raising the road.”

David Woodward, chairman of Eye and Dunsden Parish Council, said: “Our intention is to poll the people in the parish to try to gauge their views on the issue.

“We have heard from the people in Sonning Eye who are overwhelmingly against it but we need to take the view of the people in the wider parish as well.

“Is it worth the disruption of closing the road to build the thing in order to save a one in five-year flood event?

“Can the county council adequately reassure the Sonning Eye people that raising the road by up to two metres is not going to make their domestic flooding worse? It’s a very sensitive issue.”