6ft apple is first tree to be planted at community orchard 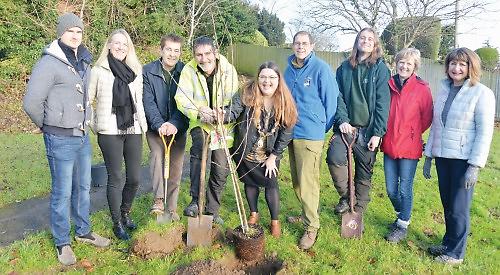 THE first tree at Henley’s new community orchard has been planted.

The 6ft apple tree will be followed by another 30 apple, cherry, pear and plum trees on a parcel of land off Paradise Road, which is owned by the town council.

An edible hedge of blackberries and raspberries will also be planted.

The rest will be put in at a special planting day from 10am to 3pm on January 20 which residents are invited to join.

The trees will be supplied at cost by Toad Hall garden centre and the council’s parks services staff will oversee the orchard but the council hopes that residents will also help maintain it.

The Mayor said: “This is a really great idea. We have had people coming forward saying, ‘we have got particular expertise in this area and would love to be involved’.

“These days people barely know other members of their neighbourhood so initiatives like these bring people together.”

Victoria Newton, co-organiser of the Chelsea Fringe Henley alternative gardening festival, has helped with the project.

She said: “It’s about enhancing this space for the immediate local residents and encouraging outdoor play and also enhancing community relationships.

“We have got a small group of residents who are going to take the project forward but it’s really important that everybody in the local area feels they can be involved.” Future events at the orchard could include educational days, pruning workshops and apple days.

Peter Phoenix, who lives in nearby Leaver Road, said: “It’s a great idea. Supermarkets talk about ‘fresh’ all the time but fresh is taking it from the tree immediately.”

Marcus Militello, the council’s parks conservation warden, said: “It seemed like an area of Henley that was screaming out for somebody to do something. It just needs a bit of love and for the community to be involved, I think, is really invaluable.”