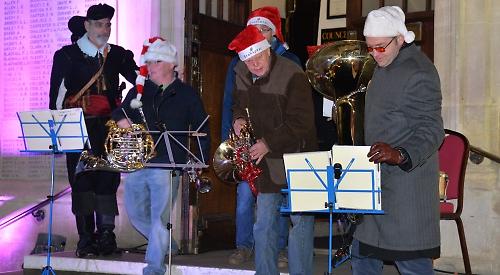 MEMBERS of the Henley Symphony Orchestra performed on the opening night of this year’s Living Advent Calendar.

They performed a string of festive classics on the steps of the town hall last night (Friday) as the annual Christmas Festival was in full swing.

Richard , who chairs the calendar, led a countdown from three before the group emerged from the town hall.

They performed Winter Wonderland and Have a Merry Little Christmas along with the themes from the film 2001: A Space Odyssey, animation Wallace and Gromit and La Bamba.

The evening raised more than £400 for the Henley and Peppard branch of the Royal British Legion, the chosen charity for the night.

The event involves 24 half-hour performances by singers, dancers and other acts at 6.15pm each evening until Christmas Eve.

All but the final night will have a dedicated charity, which will be able to publicise its work and hold a bucket collection.

The proceeds from the Christmas Eve performance will go to Henley Mayor Kellie Hinton’s chosen good causes for her year in office.

Mr Rodway, a partner at the Head Partnership solicitors in Henley, said he was pleased with the first night.

“It’s a new act to the event which is always good,” he said.

“I think everybody had a good time, we raised a lot of money for the charity, and hopefully there’s some enthusiasm for the rest of the programme now.”

Tonight’s performance (Saturday) will be held at Leander Club.

For a full round-up of the Living Advent Calendar so far, see next Henley Standard.