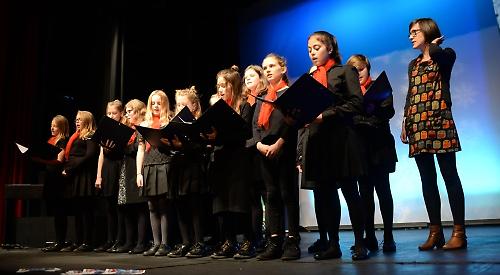 A CHOIR of about 20 pupils from Gillotts School in Henley were the stars of the Living Advent Calendar's sixth night.

Gillotts Voices, which is made up of girls and boys from years seven to 10, took to the stage at the Kenton Theatre and performed a mixture of festive and popular songs.

They sang The Carol Of The Bells and The Twelve Days Of Christmas, during which they held up cards representing each of the "gifts" in the lyrics.

Soloist Martha Golledge performed Riptide by Vance Joy while Izzy Young sang Count On Me by Bruno Mars. Hannah Leach-Scrivens, 12, took to the piano to perform a song she had written called Eternal Love.

The concert finished with an ensemble rendition of Little Drummer Boy. The evening raised £158 for the Chiltern Centre for disabled children, off Greys Road, whose chairman of trustees Paul Barratt gave a short talk about the charity's work.

Afterwards, Hannah said: "I wrote the song about four weeks ago and enjoyed playing it. I was a bit nervous but it wasn't too bad because I've performed in front of an audience before."

Gillotts' head of music Frances David said: "It went really well and the Kenton was a fabulous venue for it. We performed outside at last year's Living Advent Calendar, which we still enjoyed very much but it was nice to be in the warm this time!

"I think the pupils have done exceptionally well this term, especially with all the activities they've been taking part in over the Christmas period."

The calendar initiative has now raised £1,750 for good causes in its first six days, beating last year's record of about £1,400.