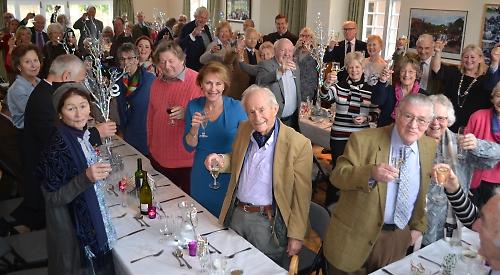 A SPECIAL lunch was held to mark the retirement of the rector of Henley with Remenham.

About 60 people gathered at Remenham parish hall on Sunday to mark the end of Rev Canon Martyn Griffiths’s 13-year tenure.

It was a chance for villagers to say goodbye and thank the rector and his wife Anne for all their hard work.

Canon Griffiths, 65, who will step down on January 14, has been the priest at St Mary’s Church in Hart Street, Henley, and St Nicholas’ Church in Remenham since 2005.

His wife is a former special needs
co-ordinator at Trinity Primary School in Henley.

The lunch was organised by Sue Laing, a member of St Nicholas’s parochial church council, and churchwarden Charlotte Every.

Guests were welcomed with sparkling wine, donated by Bill Ronald, from Aston, before sitting down for a meal of chicken casserole and mashed potato followed by a selection of desserts and cheese.

The speech and toast were made by Anthony West, a long-standing member of the church council and a Remenham resident.

He said: “When Martyn and Anne arrived among us some 13 years ago, we were all slightly apprehensive about welcoming an incumbent who had clearly never lived south of Watford.

“However, our concerns were soon put to rest when we came to realise that a native Brummie and an adopted northerner was well able to cope with the genteel Thames Valley congregations. Outside formal clerical duties, Martyn has joined in and contributed in full measure to the secular activities of the parish, whether in chairing the parochial church council, in support of the summer fayre, in the affairs of the parish hall, or, of course, in the Remenham Thespians.

“In the latter context, he has always been the despair of the director, never knowing his lines at the dress rehearsal but always coming up trumps on the night.

“As for Anne, she must be the most prolific caterer and party-giver that the united benefice has ever known.

“None of us will forget her provision of refreshment, whether nibbles or a full-blown meal, on so many occasions and, of course, her constant support of Martyn for the benefit of us all.

“However, all good things must come to an end and we shall be very sorry to see Martyn and Anne leave us on January 15 to start a new life in Cholsey, happily not that far away.

“We all thank them both for everything they have done for our parish and we wish them a very happy retirement.”

Mr West presented Canon Griffiths with a cheque for £3,900 from members of the congregation and the Remenham community and a bouquet of flowers to his wife.

Miss Every said the lunch went very well. “There was a very good atmosphere and it was very much a community event which brought together the village of Remenham as well as the congregation of St Nicholas,” she said.

“December 6 is St Nicholas Day, who is the patron of the church, so we always have a glass of wine after church. This year, we thought ‘let’s have the rector’s retirement party on that day’. We wanted to do something where just Remenham said ‘goodbye’.

“Martyn and Anne have both been fantastic about entertaining people and are very open and warm people. We’ll be very sad to see them go.”

Miss Every thanked Sharon Hern, of Absolute Delights in Shiplake, for providing the casserole.

Canon Griffiths, who celebrated the 40th anniversary of his ordination in December 2015, said: “I thought the lunch was great.

“The good people of Remenham really pulled out the stops and I’m very grateful to them. Both Anne and I thoroughly enjoyed it and we’re immensely grateful.

“There was such a good cross-section of people there from right across the village and parish.”

He said he was looking forward to retirement. The rector said: “When a lot of people retire they are already in the home where they plan to stay. I’ve got to get used to owning my own house for the first time ever!”

He said the garden would keep him and his wife busy and he planned to brush up on his French and Italian as well as his piano-playing.

Canon Griffiths said his time in Henley had been the happiest of his ministry.

“It’s been a lovely place to finish off,” he said. “There are some fascinating, not to say eccentric, people in Henley who just lighten the day.

“It’s the people who make the whole thing tick — they are just great folk to be among.”

During his tenure, Canon Griffiths took not only church services but also civic and community events, such as the Remembrance Sunday service in Henley market place and the special Sunday service at St Mary’s during Henley Royal Regatta.

He has helped raise thousands of pounds for the churches and took part in the Thames Path Challenge in 2010 and 2011 in aid of a new roof at St Mary’s.

Canon Griffiths was educated in Sutton Coldfield before attending Nottingham University and Kelham Theological College in Nottinghamshire followed by a year at St Martin’s College of Education in Lancaster.

Following his ordination in 1975, he served in parishes in the dioceses of Birmingham, Manchester and Blackburn and served on a number of diocesan committees.

From 1980 until 1984, he was assistant administrator at the Shrine of Our Lady of Walsingham in Norfolk before moving to Preston.

He applied to be rector of Henley after seeing the job advertised in the Church Times in 2004. He was inducted on January 15, 2005.

Canon Griffiths will lead his final service at St Mary’s on Sunday, January 14.

• More pictures from the lunch will be published in next week’s Henley Standard.