We must stop river invader 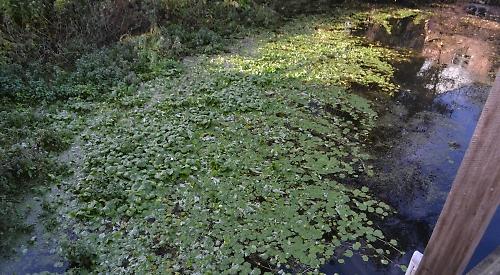 URGENT action is needed to clear an invasive weed from the Thames before it is too late, says an ecologist.

Professor Alastair Driver says the floating pennywort that is growing in the river in Henley, Sonning and Wargrave must be eradicated before the New Year or it may become untreatable.

The weed, which comes from the Americas, can grow up to 20cm in a day and forms a thick layer that kills flora and fauna by depriving them of oxygen.

Residents have complained about clumps of the plant clogging the river and say that the Environment Agency’s attempts to clear it have not been thorough enough.

Last week, Henley MP John Howell called for an urgent debate in the House of Commons on how to deal with the “nasty” plant, saying it was threatening wildlife along the Thames.

Prof Driver, who lives in Sonning and is a former conservation manager at the agency, said: “I have had conversations with them and I’m assured that they are taking it seriously but they don’t have the resources to eradicate it completely at the moment. They can do some clearance and come back next year for further clearance but my gut feeling is that will be too late.

“Unless they eradicate it now while it is still dry and the water levels are not too high there is a serious risk.

“They need extra resources because this is a burden on them. This is the first year I can remember it being in the middle Thames.”

Prof Driver said he had witnessed the plant growing at “remarkable” speed and was worried that it could spread next year and even affect the Henley Royal Regatta course.

He said: “There are large quantities in the backwater that weren’t there in September, which is a remarkable growth rate.

“If that area is not cleared it’s going to be covered from bank to bank in a year’s time as well as getting on the regatta course.” Speaking in the Commons on Thursday last week, Mr Howell said: “May we have a debate on a weed called floating pennywort?

“It is a strong contender for the worst aquatic weed in the UK and it is affecting large stretches of the Thames, including around Henley. A debate would allow us to sort out how to deal with it.”

Andrea Leadsom, leader of the house, replied: “I agree that floating pennywort is a highly invasive non-native species that has a significant environmental impact.

“The Environment Agency has removed thousands of tonnes of this plant as part of a co-ordinated programme of removal and spraying to control its growth.

“My honourable friend will be pleased to know that the agency redoubled its efforts to remove floating pennywort from the Thames and its tributaries throughout October and November and is putting in place a spraying, removal and monitoring programme from spring 2018.”

Mr Howell told the Henley Standard that he had received a lot of correspondence about the issue, adding: “I thought it right to call for a debate to clarify what was being done and how it was being dealt with.

“This is a really nasty weed that changes the availability of oxygen in the river and thus threatens fish and invertebrates, chokes drainage systems and crowds out native water plants. It’s able to grow at phenomenal rates.”

He said: “I hope it will make people realise that this is a special case where extra resources make all the difference and could save millions of pounds.”

An Environment Agency spokesman said: “Backwaters of the River Thames at Sonning and the River Kennet at Blakes Lock were largely cleared of the plant in the last few weeks.

“We are aiming to begin similar works around Henley before the end of the year with the support of specialist contractors.

“We will also undertake further work on some of the river stretches already tackled in order to reduce further the risk of regrowth. The current cool conditions have slowed growth down, making it a good time to remove floating pennywort, but in warmer months the plant can grow extremely quickly and spread from very small fragments.

“Effective long-term management is extremely challenging, potentially very costly, but very important if the plant’s spread is to be controlled.”

The “carpets” of pennywort are too heavy to remove by hand so must be pulled out using mobile cranes then incinerated to ensure they do not reproduce. Every fragment must be destroyed to prevent an infestation from recurring.

It was accidentally introduced in the early Nineties by people discarding garden plants and it is a criminal offence to grow it in the wild.

It is thought to have spread to the Thames from a lake at the Green Park science estate in south Reading in about 2008.