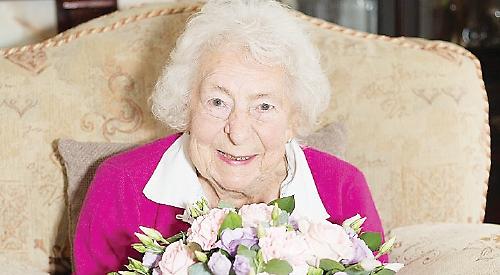 THE daughter of a 91-year-old woman who was killed in a crash near Wargrave says she will be “completely lost” without her.

Gladys Goodwin, who lived in Wargrave, died in the accident on the A4 Bath Road on Tuesday last week which also claimed the life of police motorcyclist Pc James Dixon.

She was a passenger in a car which collided with Pc Dixon’s motorcycle.

Mrs Goodwin’s daughter Sandra Blunden, 62, said: “Mum was a fun-
loving, jolly lady whom everybody loved as soon as they met her.

“Mum and I used to have regular monthly trips to Christchurch in which we met up with friends and had lots of laughs.

“She never wanted them to end but I used to tell her that we would be coming back in a few weeks’ time and that was okay then. We were together nearly all hours of every day. I will be completely lost without her. She was full of fun and laughter and never had a bad word to say.

“Mum also leaves behind a son, brother, cousin, two grandchildren, which are my children, and two great grandsons.

“She will be now be reunited with her other grandson, Tom, and husband Joe. I will remember her as the perfect mum that everybody would want.” Mrs Blunden’s son was killed when his car span out of control on the A404 in Marlow in March 2011.

At an inquest into his death, the coroner recorded a verdict of misadventure after hearing that the 17-year-old had panicked and oversteered moments before the crash.

Pc Dixon, 39, from Thatcham, recently married his wife Sam, who is due to give birth next year.

In a statement, his family said: “James, or ‘Dixie’ as he was better known, was a fantastic husband, son, brother, friend and colleague.

“Words cannot describe the loss that we all feel right now. He not only was a great guy but he was one of the proudest police officers around.

“We will never be able to fill the hole that he leaves behind, but he will forever be in our hearts and memories for ever and always.”

The officer was based at Loddon Valley police station in Earley and was known for his appearances on the TV show Road Wars. Thames Valley chief constable Francis Habgood said: “James was a hugely respected officer, serving with the force for 18 years in a variety of roles, including in local policing, roads policing and force intelligence and specialist operations.

“In policing we often talk about the strength and importance of the police family and that is never more so as we share in the pain of loss and offer support to one another at this time.

“We have received countless messages of support from other forces and our emergency service partners, demonstrating that our policing and emergency services’ family extends far beyond our own borders.

“I also extend our thanks to our communities and other agencies for the many messages of condolences we have received. Our thoughts remain with Pc Dixon’s family and friends, as well as those of Mrs Goodwin at this very difficult time.”