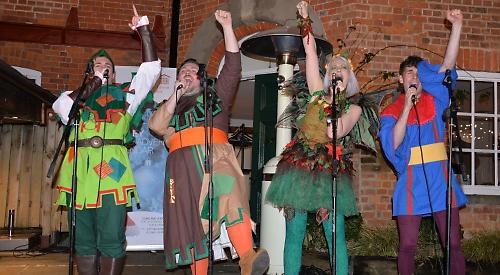 ROBIN Hood and his merry men were the stars of the 12th night of the Henley Living Advent Calendar.

They group, which included the heroic outlaw, Friar Tuck and Maid Marian, performed two songs to a crowd of about 50 people in the courtyard of Hotel du Vin in New Street yesterday (Tuesday).

They sang their versions of It’s Raining Men, by The Weather Girls, and I’m Gonna Be (500 miles), by The Proclaimers, as Robin serenaded Marian.

They were promoting this year’s pantomime at the Kenton Theatre, which starts on Friday and runs until December 28.

The evening was supporting two charities on behalf of the Henley Festival – the Charlie Waller Memorial Trust, which promotes awareness of depression, and the Teenage Wilderness Trust, which supports students who find it difficult to engage with mainstream education.

Festival chief executive Charlotte Geeves said it was ‘thrilled’ to be working with the organisations for the next three years.

Richard Rodway, who chairs the calendar, said: “I’m not sure those costumes were designed for zero degrees so a fantastic effort!

“It’s different for the advent, relative to what we have had the other nights, but quintessentially festive Henley by definition – Henley panto.

“I thought it was a fantastic preview and I urge everyone to do what I’m going to do with my kids and go and see the full show because on the strength of that I know it’s going to be fantastic.”

Raffle prizes included a £60 Copas voucher, wine, champagne and two general admission tickets and parking to any night of next year’s festival.

Tonight’s performance (Wednesday) will be held at Magoos in Hart Street.