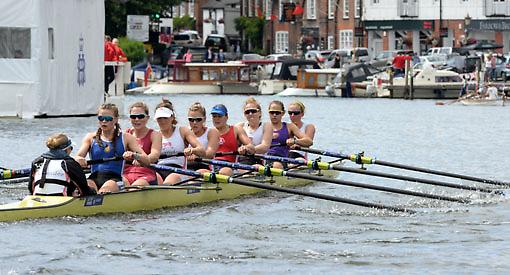 THREE events for women that were introduced at this year’s Henley Royal Regatta have now been given titles.

A new trophy for each event will be presented to the winners at next year’s regatta.

The regatta stewards announced the move as well as some rule changes and three new stewards after their meeting in London on Tuesday.

No oarsman can now compete in Temple Challenge Cup if he has won a medal at a world under-23 championships.This means top athletes are no longer barred from the event as a crew can now comprise rowers from second and third eights.

No oarsman can now compete in the Prince Albert Challenge Cup if he has won a medal at a world under-23 championships.

Mr Murray has helped the regatta for many years with duties including entries, entries finance, qualifiers, race reporting during the regatta and as part of the commentary team.

He was on the national championships committee from 2005 to 2009 and its chairman from 2007 to 2009 and is also on various regatta committees and as well as being regatta controller of the Henley Town and Visitors’ Regatta.

Mr Murray has been a member of Henley Rowing Club for many years and was a key member of the organising committee for the 2005 rowing world cup and 2006 world championships.

Ms Hosking won a gold medal for Great Britain at the 2012 Olympics in the lightweight double sculls with Katherine Copeland and in 2012 was appointed an MBE in 2013 for services to rowing.

Dr Tillett competed in the Atlanta, Sydney and Athens Olympics and in 2004 won a silver medal in a pair with Katherine Grainger.