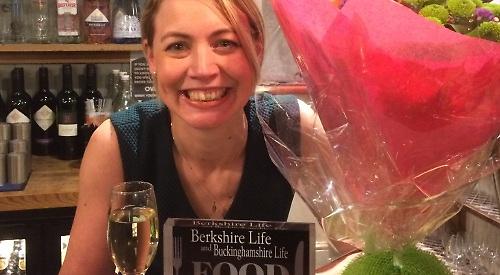 A PUB has won an award for the second year in a row.

The Horns in Crazies Hill took the best family dining category at the annual Berkshire and Buckinghamshire Life magazine awards.

Last year, it was also nominated in the awards for pub of the year and landlady Sandra Purdy was nominated for newcomer of the year, having taken over the Brakspear pub in 2015.

Mrs Purdy, who is the longest-serving tenant at the pub for 10 years, also won the best newcomer award at last year’s Brakspear hospitality awards.

Magazine editor Jan Raycroft visited the pub to present the landlady with her award.

Mrs Purdy said: “Christmas has come early for us with this award and this is a nice present to receive. To have won the award two years on the trot is great.

“It shows good consistency and hopefully we can get more awards next year.

“I’m very pleased and proud of the whole team at the Horns for their continued hard work.”

She took over at the pub after moving to Crazies Hill from Lancashire to be closer to her family in Newbury and became the seventh tenant in as many years after John and Sarah Schlaefli left the business after just 18 months in charge.

Mrs Purdy has more than 20 years’ experience in the pub and restaurant trade.

The pub holds regular events for customers including quiz nights, barbecues and an annual beer festival in August called Hornsfest.