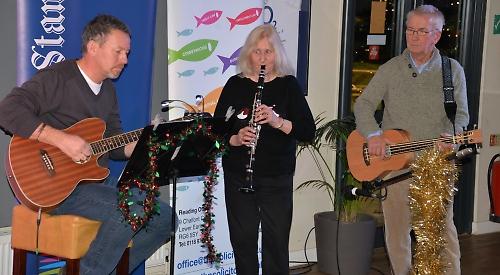 A THREE-piece band played to a crowd of about 150 people on the 16th night of the Henley Living Advent Calendar.

Anne and the Doughboys, featuring Anne Baker and Mike Lawlor, of Lawlor’s The Bakers which is based at Henley Enterprise Park, performed at Corner 81 in Henley Rugby Club tonight (Saturday).

Mrs Baker played the clarinet, Mr Lawlor the bass and they were joined by Andy Crook on guitar.

Their set included White Christmas, Rockin’ Around the Christmas Tree, Good King Wenceslas, Let it Be, Somewhere Over the Rainbow and Streets of London, before finishing with Silent Night to which the crowd sang along.

Richard Rodway, who chairs the calendar, said: “It was great to see this place packed and it was like some sort of jovial, festive social club with some wonderful music and people joined in.

“There was a real sense of community and festive cheer I thought tonight.”

Guests enjoyed mulled wine and mince pies and the evening was raising money for the Henley branch of Parkinson’s UK.

It has about 70 members and offers support for people who suffer from the condition, and their carers, as well as raising money to fund research.

Raffle prizes included a bottle of Mr Hobbs gin, a hamper, jewellery from Studio 35, in Duke Street, and baked good from Lawlor’s.

Tomorrow’s performance (Sunday) will be held at the d:two centre in Upper Market Place.