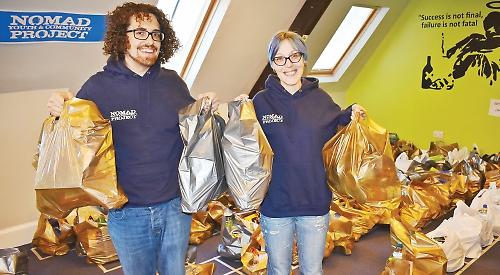 THE Nomad food bank in Henley is giving 130 parcels to local families in need this Christmas.

They have been put together using items donated by the public as well as the Mosawi Foundation, which is based in the town.

Volunteers from Invesco Perpetual helped staff at Nomad, which is based at the d:two centre in Upper Market Place, to pack them.

Sarah Lane, one of the charity’s youth and family support workers, said: “The idea is to take the pressure off families at a time which can be particularly difficult financially.

“Many of the recipients will be people we work with throughout the year so it’s a chance to see how they’re doing and give them something to smile about. It’s nice for them to have some treats and to know people care about them.

“Henley may be known as an affluent town but it does have pockets of deprivation and it’s not an easy place to live if you don’t have money.”

Nomad is seeking donations to replenish its food bank in time for the new year. Items may be dropped off at Tesco in Reading Road, churches or at the d:two centre.