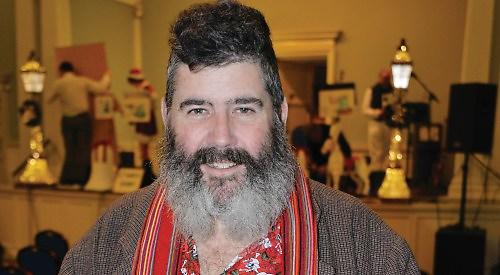 A MUSICIAN says he is lucky to be alive after having a life-saving operation to remove a brain tumour the size of a tennis ball.

Martyn Cooper, 56, underwent more than 11 hours of surgery to take out the malignant growth.

His brain still contains about 1cm of cancer, which surgeons were unable to remove because it was wrapped around a blood vessel.

But the former nurse who lives near is back performing again and he has played twice at this year’s Henley Living Advent Calendar.

Mr Cooper, who performs as Eek the Clown and is known for his sense of humour, first noticed something was wrong in September last year.

He had to give up voluntary roles as a governor of both the Royal Berkshire Hospital in Reading and Caversham Park Primary School.

Mr Cooper said: “What I’d noticed was that sometimes I wasn’t very good at doing them. I couldn’t understand why I was struggling. I presumed it was my diabetes.” He continued going to the hospital signed up for a nursing course 20 years after leaving the profession.

Mr Cooper, who chose to do his placement in the intensive care unit, said: “We got into the classroom and what I would consider relatively basic nursing stuff that someone with my previous experience wouldn’t struggle with, I struggled with. Then came the practical stuff.”

He had bought a pair of sturdy shoes to wear on the ward and said these felt heavy on his feet. He thought he was just out of shape until he developed a limp, which became progressively worse.

“I was dragging my left foot,” he said. “I went shopping with my wife and she’s got one leg but I was 300 yards behind her.

“I was also sleeping a lot and getting a lot of headaches. I was finding the workload very difficult and the instructions very difficult to follow. I’d need them repeated a few times.” Mr Cooper, who has played the guitar since he was 15, said alarm bells started ringing when he was unable to play a piece of jazz music.

He explained: “I just couldn’t get my fingers in the right position and I couldn’t understand why they weren’t working. That was the trigger for me.

“I thought, ‘I’m in my fifties and I’ve not looked after myself, I’ve had a stroke or something’.”

In December he went to see his GP at the Emmer Green Surgery who immediately referred him to a specialist at the Royal Berks.

The neurologist asked him to walk 10 yards to a water cooler.

“He said, ‘that’s not right is it?’ I could walk but it was with a very obvious limp. I was dragging my left leg like Igor!

“Within an hour of seeing him, I was sitting at his desk with a CT scan having a conversation.

“We didn’t stop giggling while he told me I had a growth in my brain and it was a very big one in an awkward place.” He was diagnosed with a meningioma, a tumour that develops in the layers of tissue that surround and protect the brain and spinal cord.

Mr Cooper said: “Most people with a meningioma will have it on the outside of their brain, somewhere that’s nice and easy to get to.

“Mine was right down the middle of the slit at the back of my brain.

“The neurologist said it was quite big. It had obviously been growing a long time and he said it was the size of a tennis ball.

“He was very professional and wonderful. I don’t think he’d had a clown with a brain tumour before but we had a laugh!

“One of the good, or possibly bad, things about where was was that it had been pressing on my pleasure button and I’d not been too bothered by any of this. I’d kind of been a bit stoned!

“There have been moments when I’ve been terrified but actually I’ve got past most of these fairly quickly. I knew I had to have the surgery because of how quickly the symptoms had developed.

“ could have been growing for possibly 20 years but it was being irritated and that was what was causing the symptoms.

“It had to come out because it was only going to get worse and very quickly. My speech and vision were starting to be affected.” Mr Cooper, who used to work in project management, was put on a course of steroids to stop the swelling in his head while he awaited his operation.

He said: “Steroids can exacerbate diabetes to the point that I was peeing for Britain.

He says he tried to remain positive throughout his treatment, often wearing a clown’s nose in hospital.

On one occasion he regaled a doctor in Warwick with a chorus of Goldfinger by Shirley Bassey after he’d just completed his rectal examination.

The operation took place at the John Radcliffe Hospital in Oxford on January 20.

“It was life or death and I had to come to terms with maybe not seeing my kids again. I had to do that and do it very quickly,” said Mr Cooper.

“They had to go through my brain to get to . The surgeon said, ‘this is a really difficult operation — we’ll do our best. See you on the other side’.

“I lost three-and-half litres of blood during the surgery. It must have been complete panic stations so thank goodness I was asleep. I’m very grateful to the surgeon.”

“I’ve got five years post-op but that’s based on 36 people worldwide so I’m working on 10 years so I get to see my kids as young adults.”

Mr Cooper, who lives on a houseboat moored in Reading, underwent six weeks of radiotherapy his operation.

He said: “All the hair and the beard came off but I kept a little which I coloured blue.”

He was referred to the Sue Ryder Duchess of Kent Hospice in Reading as an outpatient.

Now he has scans every three months to monitor cancer that remains.

He suffers from mild weakness on his left side and has not recovered full movement in his right hand.

Mr Cooper said: “I speak a little slower and there are occasional pauses while I search for a word.

“I just maybe notice it more but face-to-face I come across as okay, I think.”

He can still sing and play the guitar, although he can’t finger pick, and performed with the Hairy Molly Barn Dance and Ceilidh Band on the second night of the Living Advent Calendar and with the Congo Frog Boudoir Band last Friday.

He is also practising the fiddle and learning to use the Theremin, an electronic instrument controlled without physical contact, and he hopes to continue his puppetry.

He plans to tour with a show called “Too Busy Living To Be Dying” and is planning a new season as Eek the Clown with the Disappointing Clown Company.

“There’s a tiny bit of cancer left and, fingers crossed, it will only grow as slowly as the original so odds are I’m not going to die of that.

“There’s a part of me that thinks if I ever needed surgery again I would kind of think ‘probably not’.

“Have I been unlucky in getting cancer, or have I been lucky that I had cancer and it has been dealt with? I tend to think I’ve been lucky.”